Skinners’ School in Tunbridge Wells, Kent, is already renowned for being at the front of the fight against saving energy, with solar panels supplying all of our science and catering facilities and filtering left over energy into the national grid. These were in place before I (Miss Montoya) started and organised by a teacher called Mark Moody. He and his Sustainability Group consisting of mainly students from across the years were also able to recently complete the building of a sensory garden at a local school called Oakley with the help of the High Weald of Kent project. With his knowledge, experience and guidance I was then able to put my plans into action.

In September of 2008 I started as a new teacher at Skinners’ School and realised the potential to make a big, positive change to the science department, the pupils and the whole school community. So, as mentioned above, with the leg-up from Mark Moody I got my plans started. I began by finding a very enthusiastic, knowledgeable and positive group of sixth form students who were eager to be part of something so grand and exciting and lead the change. They are a mixed group with differing interests which suited the task at hand as we are linked to the sustainability team to complete 1 of the 8 doorways which covers all aspects of healthy eating. 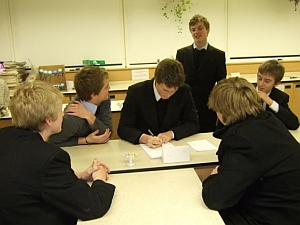 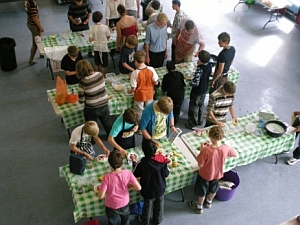 The original team aptly named themselves HEAL which stands for Healthy Eating And Living, and from there they took ownership and went  on to explore options of projects. The first that we succeeded with was the school-wide recycling of aluminium cans. We now have can crushers and labelled bins placed in key places around the school and we recycle these regularly (we are talking about many black bin liners each month!).

The next was to introduce cooking skills and a healthy eating ethos to boys lower down in the school. With a lot of hard work and preparation we organised and carried out “Skinners’ Masterchef 2009” in the Summer term of 2009. I prepared 2 lessons to be carried out by other science staff which included safety information, revision of food groups and digestion and time to design and plan a healthy 3 course meal. The challenge was creating a 3 course meal that did not require any heating or cooking on the part of the pupil so we gave them the outline of producing a salad, a baguette pizza and a fruit salad. We sourced many ingredients including lettuce from our own garden (which I will come onto later) and staff helpers were able to heat the pizzas in the school canteen kitchen. We took over the school dining hall for a total of 8 hours and all the boys in year 8 (120) were able to participate at one of the sessions. I had 2 parents of pupils and 2 members of staff help me during the sessions and I also had my band of trusty , pre-trained, HEAL sixth formers to help out at the sessions. Prior to the sessions the sixth formers had travelled with myself to Bore Place close to Sevenoaks to have a cooking session of their own with a professional chef to gain tips and training on safety. We also visited the organic garden at Bore Place to find out to set up our own on-site at school (we went in February of 2009). In the end the cooking sessions went really well, I have heard the new year 8 boys talking about the “Masterchef 2010” as being something they’re really looking forward to and our efforts were recognised, complimented and supported by all other members of staff. 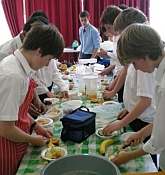 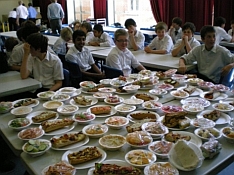 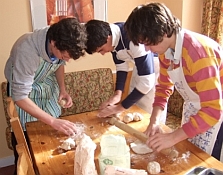 As for the garden this was our biggest project and I feel the one that we should and are the most proud of. It has yet to be named or given a proper grand opening (which we hope to do in March with a barbecue) but the transformation and produce that had grown is a true testament to the students who built it, the parents who donated and the local suppliers. We started in October last year by seeking out a suitable location with the help if the school’s management team and grounds keeper. We then worked with the High Weald of Kent Project team to work out the logistics and necessary materials and equipment to complete the project. The area was fenced off and tarpaulin was placed over it to kill of weeds. When 2009 started the HEAL team and I began our search of the materials, equipment and items to plant into our organic fruit and vegetable garden. We also put aside some Saturday mornings and rounded up volunteers from the sixth form that joined the parent volunteers that eagerly responded to my letters that had been sent out to them. For these days the High Weald of Kent team kindly lent us the necessary industrial machinery and supplied a risk assessment for our working days. Next we sent out letters requesting donations of both donations of equipment such as gloves and spades, materials such as plant pots and compost and also plantlets and seeds to grow. The response was overwhelming and we were luck to already have access to a shed to store the items, we at Skinners are very lucky to have such a fantastic school community. The shed is now full of items which we still use with pupils from different year groups to maintain the garden. 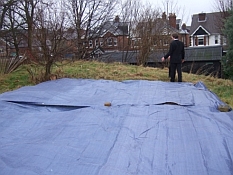 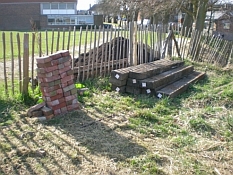 For the garden to be built we needed a lot of equipment as nobody at the school had attempted something like this before and we were nicely surprised with the offer of being sponsored and completely sourced by a gardening equipment company who has a son in the school! The company called “T & T Sussex Plant Hire” gave us all the equipment we need to have and to borrow. We had been given many items from parents, as mentioned above, but not everything so this was a blessing for our project. For the first building day we had to make sure our sleepers and compost had been delivered so with the help of the “Sevenoaks Sleepers” company and parents who made many trip with trailers to the Sevenoaks Municipal recycling we were ready. A large team of volunteers started at 10am on the Saturday and continued until 5pm. The area was cleared (including the uprooting of a tree!), the ground was turned over with a rotorvator and many hands with forks and the sleepers were sawn to be ready to be overlapped and drilled together. The next weekend we worked just as hard and managed to level the ground, fix our beds together and fill them with beautiful, nutritious compost. It took a few more Saturdays and sessions after school with s much smaller group of volunteers to get the beds ready and planted and as we got closer to the exam period the boys found it more and more difficult to spend time on it but they took it in turns and we got some year 7 pupils to help and it was all completed by the end of April. Sadly because we planted so late in the season much of the produce wasn’t ready until the summer holidays but I found homes for the food with staff and parents of the school that were linked to the project. 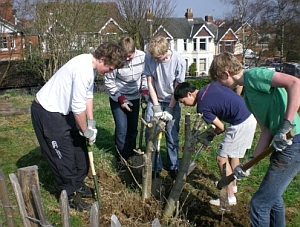 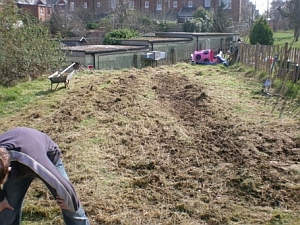 When the garden was being prepared the HEAL team gave assemblies to the younger years and we found that many boys were keen to get involved but as we hadn’t expected such a large response we were unable to use all of the boys but we now have plans this year to involve them and hopefully the middles year too because the heavy lifting and building is mostly done and so using the garden as a garden can now happen. We hope they will help maintain the garden and document the wildlife such as the foxes, moths, butterflies and bees. 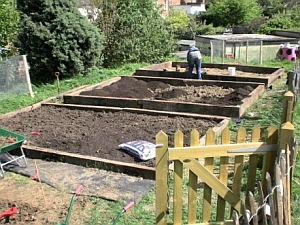 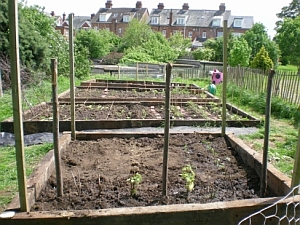 I say that the heavy building and lifting is mostly done because we have plans to extend the garden area and make new beds with leftover sleepers and hopefully recycle tractor tyres. We also hope to improve the look of the garden by introducing woodchip paths and flower beds (including a space for growing competition sunflowers). Another idea is to work with the DT departments here at Skinners’ to construct an improved irrigation system including donated water butts and improving the fruit cage and plant support structures that we have for beans and tomatoes. 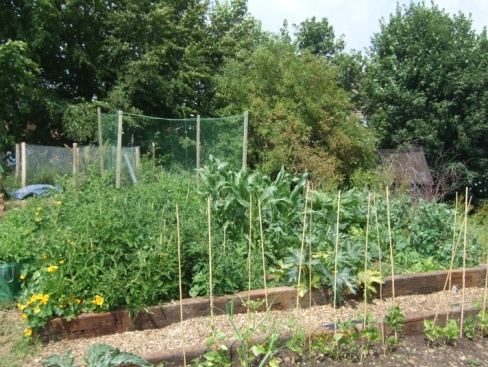 My biggest wish is to introduce the use of the garden into mainly the science curriculum and so I am in the process of arranging to meet with the coordinator of another school garden close by who has managed to do this with his science department and I am also talking to the Art, MFL and English departments to see if they too can use the garden in some way.

If anybody wishes to find out any more information please don’t hesitate to contact me via e-mail at: Maryce.Montoya@skinners-school.org.uk or by telephone on: 01892 520732