One World – People in a Global Village

This report describes the small and local actions that we have taken as citizens of a global village. We hope that by acting locally we can help to effect some global changes. It is the ‘People’ section of our Roots & Shoots mission.

Students are aware that global warming underpins much of the world’s problems, and have thus signed the school up to 1010, represented the school on The Wave, held a climate change conference and initiated direct contact with students in Tuvalu, likely to be one of the first islands in the world to disappear beneath the waves. These events describe ‘environment’ rather more than ‘people’ so will be discussed here at a later date.

Equally, students know that world population growth and global poverty are gargantuan threats to our planet and its people. To that end, students raised money for World Aids Day and Year 10 students held a MUNGA. Year 9 students supported Tools for Self Reliance, helping to prepare and pack tools for Uganda, while a large group of Year 11 and 12 students spent most of their summer vacation of 2009 working in community projects in Kenya. Our successful recycling schemes have exactly supported our contention that local action can have global impact: students have collected spectacles that, through World Vision, are sent to the developing world; they have been avid collectors of tights for Ethiopia’s fistula appeal, aluminium and mobile phones for Africa and bras for women in Africa. This work is set to increase in 2010.

Autumn term was a particularly busy one for the Fairtrade Group, a subgroup within the school’s larger Eco Group, and it is our Fairtrade work which will constitute the main body of our ‘people’ work. As always, a new steering group emerged at the start of the academic year. While several former students remained we were particularly pleased to see that far more sixth formers than usual are willing to lend a hand, perhaps a result of their experiences further down the school.

Throughout the year, we have used Fairtrade products where celebration is called for, whether celebration of individual achievements or group efforts. For instance, the new term in September 2009 was marked by a small celebration of Cadburys’ decision to make at least their milk chocolate bar Fairtrade! Squares were distributed at our first large Eco/Fairtrade meeting of term. 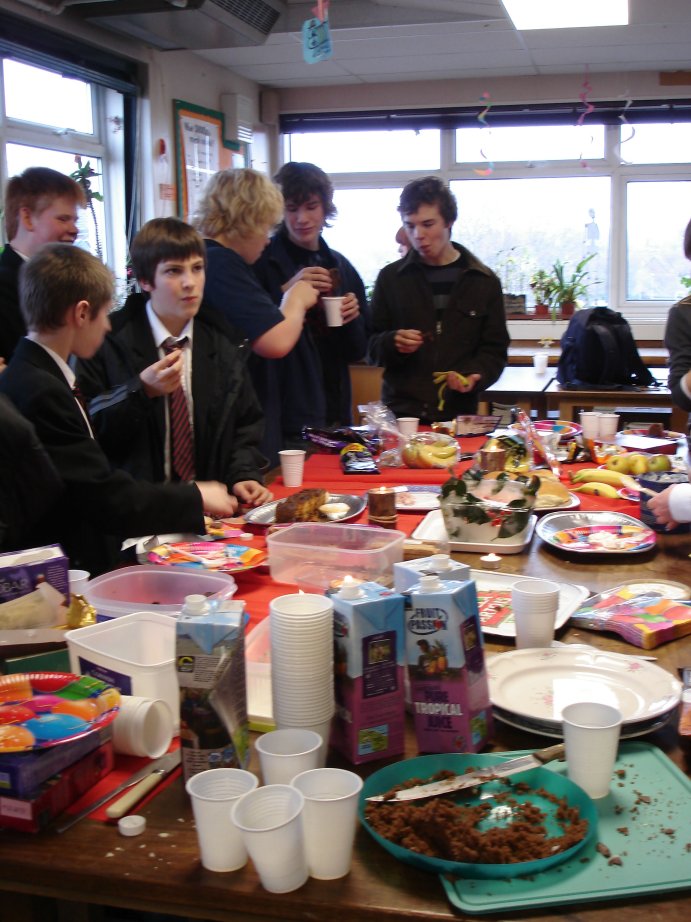 We take every opportunity to promote Fairtrade and there is no doubt that this policy works. Some of the older students make a point of buying Fairtrade. We hold regular local food and Fairtrade lunches at Ringwood. Students bring in food of their own choice – as long as it has been produced locally or is Fairtrade, it is acceptable. This usually ensures students get a reasonably balanced lunch, important in a Healthy School. One of these lunches, a Christmas party, was shared with the school Amnesty International group. We extended the lunch idea to an outside visit this year. When Year 7 and 8 students visited a local sustainability centre, we offered prizes to students who brought the ‘best’ packed lunch. In a “Dragons’ Den” competition, students had to show that they had a local item, at least one Fairtrade item and had minimised packaging. There were some superb lunches! Three winners were presented with ‘OWLS’ (energy monitors). 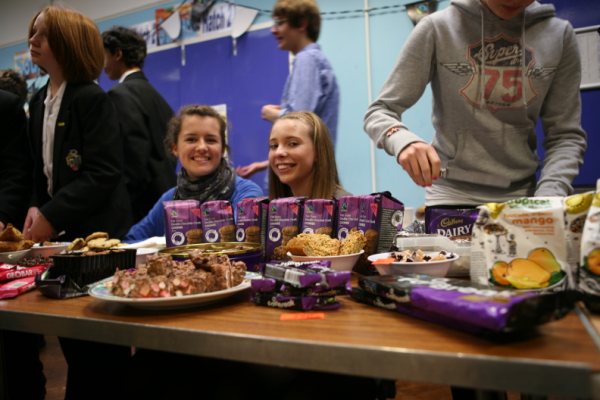 We have spent some time working with a group of local secondary schools, helping them to increase their sustainability. Each has taken up the challenge of incorporating Fairtrade into their global issues. A team of our Year 7 and 8 students launched our ‘Making a Mint’ project in our two biggest feeder junior schools. Mint plants have been grown and some oil extracted. The schools have been challenged to produce minty goods and to use Fairtrade ingredients. We found that we left insufficient time to grow and extract, so the project will be extended until summer 2010. Both schools have enrolled on the Eco-Schools programme and both are now approaching ‘Global Dimension’ through Fairtrade.

The Catering Manager of our school watched students’ interest in projects such as this and was persuaded by students to let us use the canteen once a month for a Fairtrade shop at break. Students designed posters and Fairtrade Fridays have been very successful. We hope to increase the number of these events this year. 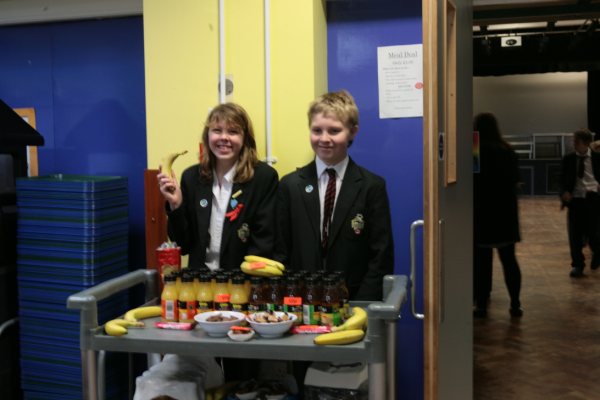 During Fairtrade Fortnight, we held three big events – the screening of the film “Black Gold” and two large Fairtrade café events. One was held at break, the other at lunchtime. Both events involved large numbers of students of all years (7 to 13). Sixth formers and a Year 11 student (who attended the first Schools’ Fairtrade conference in 2008) took the lead and organised posters, bunting, screensavers and promotions. Some students brought in food to sell, sometimes bringing in goods they had baked themselves. We also purchased food from a local shop and Sainsbury donated £20 of Fairtrade goods. We chose to spend that largely on fruit. The aim of the café was to introduce as many as possible to Fairtrade and in this respect it was highly successful as hundreds of students attended the event. The small profit that was made was reinvested in more Fairtrade products for other events such as Fairtrade lunches.

Students also wrote a Fairtrade quiz that was used by all tutor groups in Fairtrade Fortnight. One version was specifically designed for the younger children. 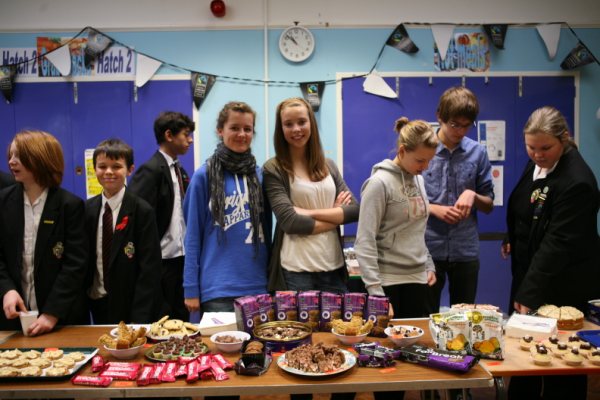 As a school working hard to improve its sustainability, we run a scheme in tutoring that rewards students for various types of action (such as organising a Fairtrade event or tree planting or promoting a campaign). We find Fairtrade products are often very suitable rewards, and a popular group reward is a Fairtrade football.

Fairtrade in the Curriculum

Fairtrade features in virtually every subject at some time in the school year. In some subjects, it might be a simple reference to Fairtrade but in others it features in entire schemes of work. Often it is considered alongside other issues. Some lessons have been particularly innovative, for instance, Dance students have choreographed and performed a great Fairtrade dance routine twice in recent years. One, written two years ago, was performed at a county dance festival. In Languages, ‘Commerce Equitable’ is discussed on our annual Eco Day and usually ends with a noisy demonstration in town!

One of the school governors has always supported our Fairtrade work and we were delighted when she and her husband decided to take a Fairtrade holiday. In December, she gave a fascinating account of her holiday, a Traidcraft ‘Meet the People’ tour of Thailand, to about fifty students of mixed ages.

We also invited an outside speaker from Traidcraft into school to give an excellent lunchtime talk, projecting his own photos taken in India. With links with a Fairtrade shop, he was able to show students a wider range of Fairtrade products than we are normally able to do, including jewellery, crafts, fabrics and toiletries. Some were unexpectedly available for sale, and students were able to make small purchases. He provided valuable insights into the problems facing Traidcraft and similar experiences as a result of supermarkets such as Marks and Spencer and Sainsbury providing cheap Fairtrade T-shirts. He also dispelled the myth that Fairtrade is only about food! Students plan a Fairtrade fashion show in 2010 and our Traidcraft speaker was the catalyst. 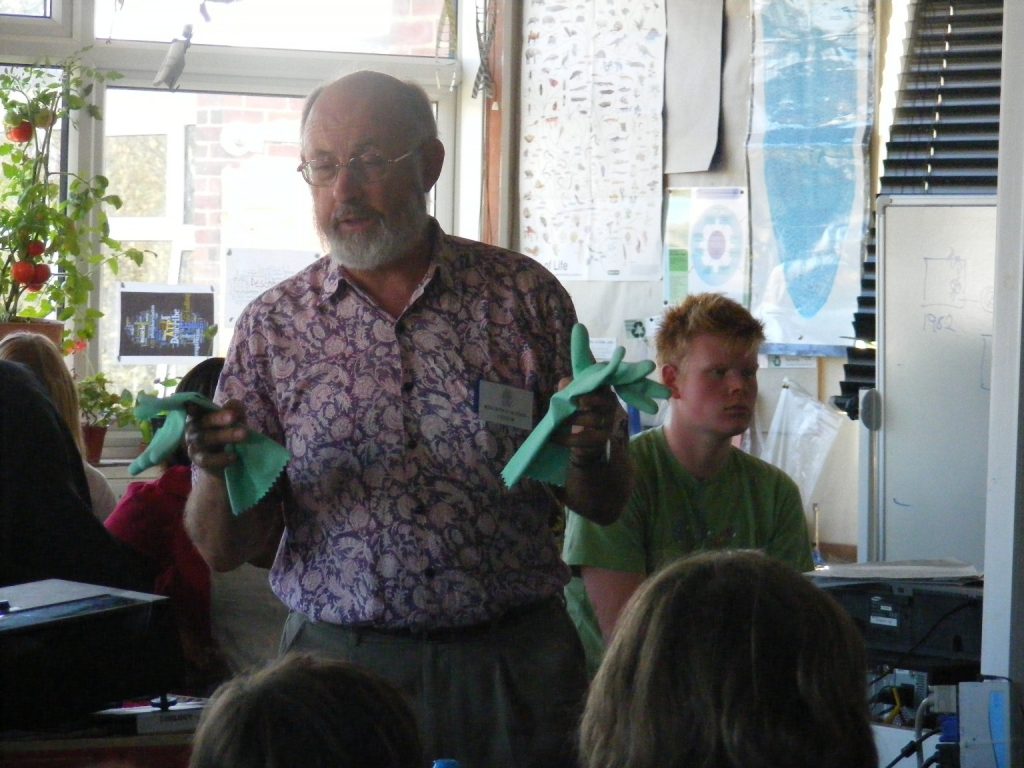 Sixth formers and other students in the Fairtrade group ran an entertaining session of Fairtrade games in the school hall at break. There were board-based games such as guess the number of Fairtrade products on a poster, a ‘can you buy a Fairtrade version of this product?’ game, another quiz and an A to Z of Fairtrade. There were several more physical games such as a Fairtrade treasure hunt (for Easter eggs – some weeks after Easter!) in the grounds, pin the banana in the monkey’s hand and a banana fishing game, using Fairtrade bananas in paddling pools. The event was well supported and we were particularly pleased to be able to use this event to introduce Year 7 to Fairtrade. Students took the view that this should be a fun event whose prime purpose was awareness-raising. We repeated the event at our Christmas Fair (2009).

Work with the Town Council

Ringwood is a Fairtrade town, and students were instrumental in the town obtaining this status. Students currently sit as advisors on certain committees of the town council, the Community Committee, the Amenities Committee and the Environment Committee, for instance. This ensures good liaisons between the school and town, and that Fairtrade issues are constantly in the spotlight which is our ultimate aim. 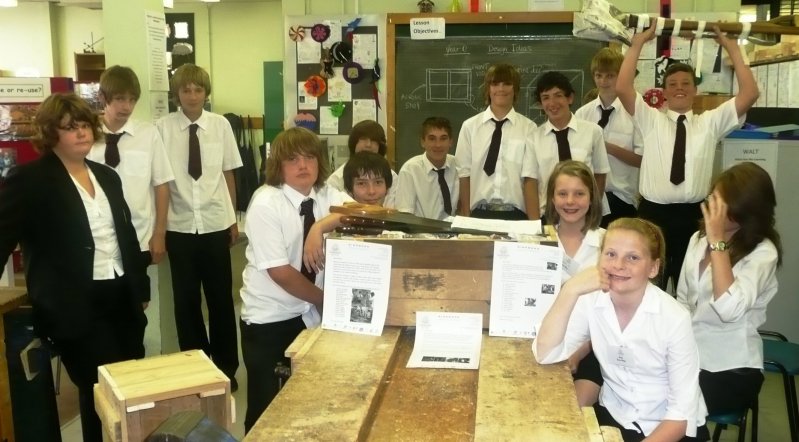 Sixth form students have organised and undertaken several surveys in the last few months. The first identified patterns of adult awareness of Fairtrade and their use of Fairtrade products. This revealed 100% awareness of Fairtrade and of the activities in school. It also indicated that every department in the school uses Fairtrade tea, coffee and sugar, and most also buy Fairtrade biscuits. All adults (teaching and non–teaching staff) indicated that they chose to buy Fairtrade on a regular basis and were happy to pay a little more. We were pleased with the results: the school is large (1650 students) with a correspondingly large staff. Students had planned an awareness campaign for those who did not use Fairtrade. As it seems unnecessary, we plan a coffee morning, aiming to let people taste as many varieties of Fairtrade coffee as we can afford to buy in.

A second survey was undertaken in October 2009 in every tutor group in the school. This asked similar questions of students, but started with more recognition and awareness questions. Results were collated by sixth form students on the Fairtrade team, and have been presented as graphs by Year 7 students working in maths lessons. The range of Fairtrade products used by the staff, and by students and their parents, has increased dramatically. We have maintained our use of ‘old’ products, largely food, but our student surveys reveal a welcome uptake of non-food products. When asked what Fairtrade products were purchased by students and their families, a wonderful range of products appeared in their responses, from hessian bags and cosmetics to Fairtrade jewellery. 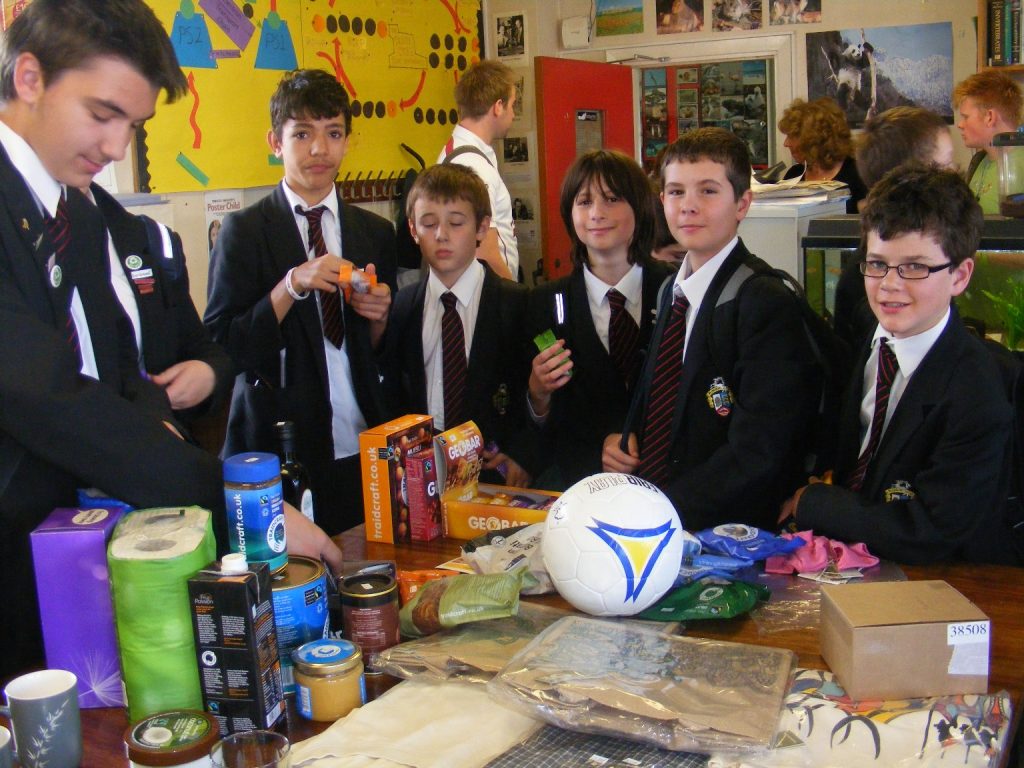 Students have taken every opportunity to highlight Fairtrade issues throughout the year, most recently taking up the ‘banana wars’ issue currently highlighted on the Fairtrade Foundation’s website. This is the practice of some supermarkets selling bananas at such ridiculously low prices that those supermarkets committed to selling only Fairtrade bananas were very badly affected. One sixth form student wrote a letter to our MP and organised a mass signing of a letter by hundreds of our students. We were pleased to receive a reply – our MP raised the issue in the House of Commons and has agreed to come into school for a one man ‘Question Time’ on Fairtrade and global issues. At the time of writing this report, we await this visit with huge interest!

Our work in Fairtrade and other global issues will build throughout the year, but we hope that this provides a flavour of our philosophy that local actions can bring about global change.

One thought on “Ringwood School’s One World Project”