Part 1 – People, Animals and the Environment at Home

We were very excited at the prospect of undertaking this project as earlier research had already alerted us to the fact that there were an amazing amount of similarities between our environment and that of the Gombe National Reserve.

Obviously there are considerable differences with regards to the temperature, and the type of vegetation and animal species within each environment, but in spite of this there was an awful lot that the children recognised as familiar. 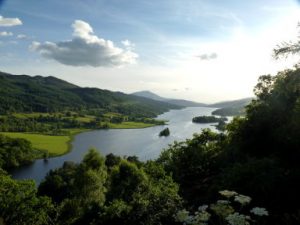 We live within sight of the hills surrounding Loch Ness which at over 20 miles long, a mile wide and 700 feet deep is one of the most iconic stretches of natural water in the world. It is surrounded along much of its length by steep forested hills leading down to narrow stony beaches and is home to small communities, huddled along the shore line.

Many areas within a few hours of us seem reminiscent of Jane’s description of her trips to Gombe along Lake Tanganyika and specifically her treks up to Jane’s Peak and Queens View in Perthshire, which the agents visited on their way home from a trip to Edinburgh Zoo, appears to replicate this in many ways.

Initially the children looked at their own environment picking up where we had left off on other projects. They were able to describe the differing aspects of their location, including Loch Ness, the Moray Firth, the Forests, Farming and Fishing communities and the importance of the Cairngorm National Park, all of which lie within our immediate location. 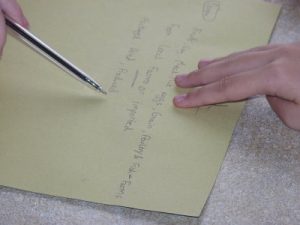 We looked at the changing world of the people living in these areas especially at the demise of the fishing industry, increasing land management changes such as deforestation and the rise of animal conservation and the growth in tourism.

Many activities were undertaken to assist the agents to better understand their own environment and in doing we also touched on the conflicts which exist between individual groups which are sometimes guilty of championing their own cause without regard to others.

Recent cases highlighted in our own area include the need to protect native species such as Wildcats and Pine Martins versus intensive logging and the creation of new homes.

Part 2 – People, Animals and the Environment of Gombe 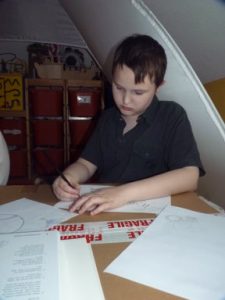 We had a need to adapt this section to fit some of our agents specific requirements, not least of which is the fact that we have visual learners who find the concept of attempting to be someone else nigh on impossible, simply because they know they are not.

As noted in Part 1 the natural landscape of Gombe appears to mirror many of the features in our own area, although on a much smaller scale. The agents studied maps of the area, carried out internet searches and read articles.

It was an immensely productive period of time with great swaths of work being undertaken, via recognised visual and audio interactive methods in a relatively short space of time in spite of the difficulties faced.

One of the most rewarding aspects of this was the industry of those agents who struggle for a variety of reasons to record any work, voluntarily picking up writing implements, to draw and log their findings.

As noted above the agents had been aware for some time that there were great similarities between their environment, the people and animals and those of the Gombe National Park.

Apart from comparing the steep slopes of Loch Ness, our undulating hills, open moorland, increasing redevelopment of farm and forestry land for houses, places of entertainment and business, with the pressures for land change in and around Gombe, we were also able to spend time contrasting the rain forests of the park, with our own Culbin Forest; a Site of Special Scientific Interest.

This included an RSPB Ranger led walk and activity morning in the forest. The children were able to identify bird calls, search for insects and bugs, go pond dipping for frogs, toads, water boatmen, fish and snails and marvel at the damsel flies flitting across the water as a range of butterflies soared above.

The children and Morag (the ranger) discussed the importance of Culbin for the protection of Red Squirrels and the measures taken to keep deer, and badger populations controlled.

Information on spiders, slugs, bracken, wildflowers etc were all passed on, with the Ranger expressing her pleasure at the depth of knowledge the children had on a range of subjects. 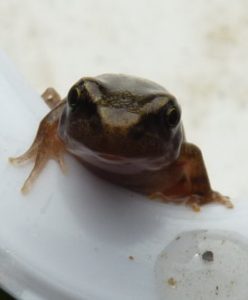 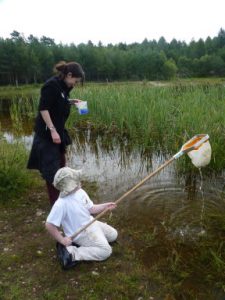 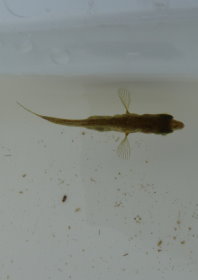 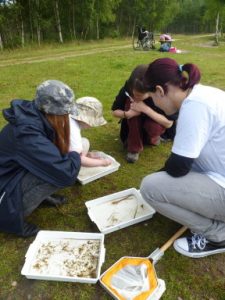 She was thrilled that they knew not only about their own environment but the importance of maintaining ecosystems even when in the case of wasps, it is difficult to want to protect them!

Morag also noted that the children appeared to have a very good grasp of the affairs of the Gombe National Park and the importance of helping others outwith our own environment and she listened with real interest to all that they had to say.

The agents also undertook activities whereby they compared and contrasted the results from Gombe and our home region yet the more that they looked, the more they discovered that the differences one would have expected to emerge were not as acute as they had perhaps anticipated.

The landscape is surprisingly similar and although species may differ, their need for protection does not, and many of our own native species are threatened by extinction.

Each area has strong animal conservation beliefs with much work being carried out to raise awareness of specific issues. Changing of indigenous population’s occupations, the fact that animals were still killed for food/sport and the massive increase in tourism are concerns for all.

Likewise the pressure on land use is very similar with large areas of forest being felled here in and in the Gombe with the result that habitat is being squeezed and ancient roaming areas are no longer accessible.

The more the profile of each region has been raised and awareness of the plight of the wild animals within them brought to the public’s attention, so tourism has boomed.

The children looked at the differences between the people with regards their expectations and aspirations and again noted that provision for one’s family was the driving force of decisions taken, even to the point where individuals in each area may want to protect their environment but the need to protect/provide for their family first, overrides this.

The similarities are as obvious on the water as off, as the increase in tourism in each region has meant a significant rise in the number of boats offering tours, trips and “get away from it all holidays”.

Jobs in Education, Conservation, Sustainable Farming and Traditional Crafts have been created and encouraged by Government intervention in both communities and each exports goods bearing their distinctive name.

One of the biggest differences between Gombe and the Scottish Highlands is our obvious lack of Chimpanzees, and the fact that the majority of our population, unlike that associated with the Gombe National Park, does not spend its day fighting to preserve its own environment.

However, the agents noted that whilst we are aware of the issues surrounding the chimpanzee situation in the Gombe, we do not know if those issues threatening our endangered animals have been brought to the attention of the local population there.

To better understand the issues, affecting Gombe we arranged for a visit to Edinburgh Zoo, in order to see for ourselves the provision of facilities for the zoo’s resident chimpanzees and to hear of the work the zoo is doing to help the local population adapt and change. 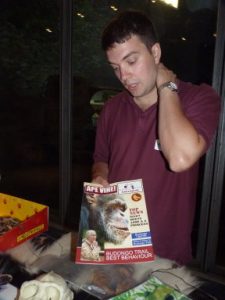 James, our guide, was very enthusiastic about Bondigo, the name of the chimpanzee enclosure and described to us how Jane Goodall, on opening the unit, had said that if chimpanzees had to be kept in captivity then nowhere better could be found.

We were impressed by the care and attention to detail and the ways in which the zoo had really attempted to recreate an environment conducive to the well being of the chimpanzees kept there.

The children were given amazing access to the chimpanzees, a private screening of a film describing the zoo’s work at Bondigo and the care taken of the local populations needs.

James, our guide, then brought forth an array of interesting artefacts including items made by the chimps themselves, as well as showing examples of traditional crafts from the region. 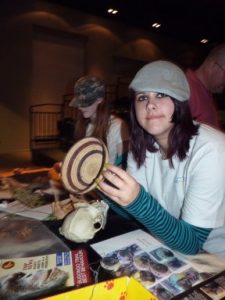 This was an important visit for the children as it not only gave them a greater awareness of the work carried out by Jane Goodall; it let them literally walk in her footsteps.

They were able to see for themselves why it is that she has championed these amazing animals for so long, what she felt about the facility they were visiting and her hopes for the future both here in Scotland and at Gombe.

The children were also able to compare and contrast other smaller animals and insects through their contact with Nick Martin and their activities in actually handling and caring of exotic, and sometimes endangered, rainforest species, with those of their own environment. 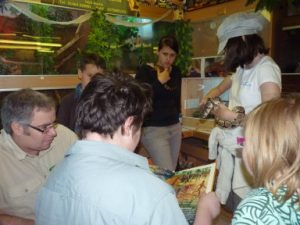 Once again this undertaking reiterated to the children the similarities which exist between the two regions as each as its own share of birds, insects, frogs, reptiles and smaller mammals.

We were also reminded that chance meetings can sometimes connect people across enormous distances and in the most unlikely manner, when a number of our agents were stopped by a lady as they mingled with members of the public at one of the Gala’s they attended this Summer.

She informed them that she recognised the Jane Goodall Logo on their T-Shirts as her friend was one of the Community Project Workers at Gombe! She then gave them one of her business cards and offered to contact her friend on our behalf, as she is confident that she would agree to correspond with us via email about her work.

We are all excited at the prospect contact actually taking place as we would be very interested in producing a short video highlighting the problems faced by wildlife in our own country, the endeavour being made to protect them and the importance we place on also helping out the communities and chimpanzee population in and around Gombe, which we would hope would be shown to some of the children and young people she is working with.