We have enjoyed an incredible autumn with stunning weather, beautiful sunsets and a wealth of nature’s awe-inspiring colour. However on the 19th of September we took part ( in honour of Peace Day) in what we are sure was one of the wettest Tesco Community Fairs ever held; the weather was so bad that it put a serious dent in our hopes of achieving 1,000 Peace Day Pledges from the public, and at one point it was so bad we despaired of reaching double fugures. However Rhona Brindle the stores Community Champion remained upbeat in spite of the atrocious conditions and whilst the band played on, free bacon butties and bottles of drinking water were passed around restoring us all to warmth and a modicum of happiness. We were amazingly lucky in that we had made prior arrangements for Nick Martin to be in the store itself with his animals and this meant that he remained dry and happy throughout the day, as did the more vulnerable members of our team, who were assigned to help him.

However, even goodwill cannot make people cross a car park in the midst of a torrential downpour and consequently the team indoors was inundated with shoppers who had nowhere to go. A bit of a melee ensued and having had to shore up our numbers in store to help over the course of the morning the decision was finally taken to abandon our efforts outside (Hurray!) and the entire team decamped into the store to help (and dry) out. Order was established and having taken only three pledges in the first three hours outside our Dove started to gain shape almost immediately. Overall we received a very creditable tally of 500 notices of intent from young and old alike for Peace Day. 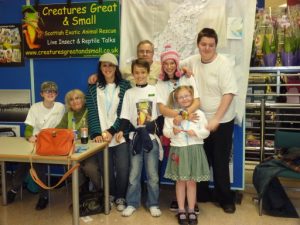 One thing which we had not expected as a consequence of our request for pledges was the sense of responsibility we felt on later reading those received; as although many simply stated that the individual would recycle more or walk to school or work, some of them had been written in memory of loved ones, with passion and a sense of realisation that if we could do simple things to help then they could too. We could not just throw these tokens away and we therefore took the decision to frame the pledges as a reminder to us all, that there is willingness and a desire to influence our planets health by ordinary individuals. In future we will however, always state that following the conclusion of any of our pledge requests that all pledges given would be recycled.

We managed to gave away hundreds of flyers, pamphlets, photos, colouring pictures and information sheets over the course of the next few hours and with the help of a couple of Nick’s other young volunteers raised awareness of Jane Goodall’s Roots & Shoots to many members of the public whilst also gaining much needed donations for Nick’s animal centre. We were pleased that we had had the opportunity of retreating in store as apart from anything else the day also counted as the children’s first activity towards their level one John Muir Award and although we did not manage to promote this or our identified wild place as much as we had wished at least we tried. The photos of the event now on display in the store certainly depict a soggy and wet affair, whilst also managing to convey the good will which prevailed throughout against the odds.

One other thing to mention is the benefit to the group of our involvement with and cooperation from Tesco’s; this has allowed us access to large numbers of shoppers and their families, which in turn has promoted the Jane Goodall’s Roots & Shoots Programme. We have also managed to set up a net work of individuals within various other organisations who we can now call upon for advice and input and although only fledgling facilitators thus far we hope that in turn our experiences and contacts will help other groups to develop.

The children’s second event towards their John Muir Award involved our spending time on our local common with John Orr, a Highland Council County Ranger. It ended up not only being a really enjoyable and informative field trip but one which had experts up and down the country reaching for their identification books. We started with a brief description and history of the area, and quickly got down to some exciting autumnal activities, to do with the animals, plant life and mini beast populations. Amongst other things this involved a colour chart match, delving for leeches in the numerous ponds scattered about, plant identification exercises, pillar building and a sea shell race. 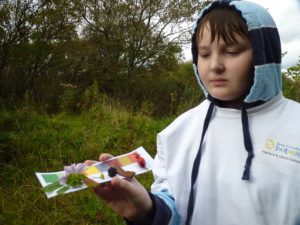 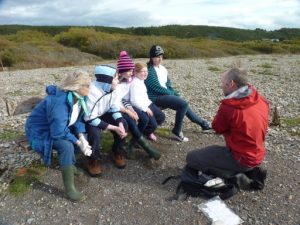 We also took part in a Tree Shake in order to see what was creeping about on the seemingly barren branches. A multitude of beetles, spiders and bugs fell down including the biggest, yellowest, fattest caterpillar we had ever seen. It was a new one to all of us, so photos were taken and a description made. Over the course of the next few days we tried and failed to get it identified and eventually it was listed on ISPOT. Many differing groups and organisations were involved in attempting to identify the beastie, and whilst it was quickly recognised as a sawfly of sorts, which particular one proved harder to establish. We were asked to conduct a second Tree Shake to see what we could discover, and the lack of any further sightings of either our friend or his mates has led the experts to narrow it down to being one of two species neither of which is considered dangerous to UK trees. In the end positive identification was given by Mark Boddington and Guy Knight, of the Sawfly Recording Scheme, who looked at the photos we had taken and agreed that our wee beastie is a Cimbex Luteus. 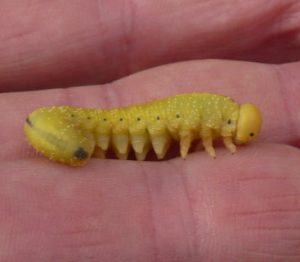 They not only described it as a significant observation but informed us that although there are previous Scottish records of it being found in Scotland before, they are old ones, and our find is therefore the first one recorded in recent times. The whole exercise really does prove that you really never know what you might find in your own back yard or how important a casual observation might be. We have been asked by the Woodland Trust to inform them immediately should we see any further evidence of this particular caterpillar or damage being done to the trees of the common. If we do then a team of experts will be sent to investigate. We hope to incorporate the work we have been asked to do as part of our protracted programme of conservation and promotion of the common.

We are in discussion with Eleanor Garty who is the Woodland Trusts Woodland Creation Advisor/Site Manager-Highlands about the opportunities available for us to undertake some activities with them. Eleanor helped chase our beastie down by sending photos to and asking for assistance from, the Forest Research Plant Health team. Another unexpected bonus of our “find” is the fact that Murdo MacDonald of the Highland Biological Recording Group has offered to give us a lecture about the Interdependency of Species; which when one considers the fact that Murdo is also a member of ISPOT and a  Biodiversity Mentor (Scotland) is an absolute honour for the team.

It was whilst reading an item placed on the Highland Biological Recording Group’s website about ourselves that we stumbled upon another article written by one of its members which had a link to the picture of a rare bee which had been found near Inverness: naturally we wanted to see what it looked like and were amazed to discover that it was remarkably similar to a bee which had been seen in our wild flower garden only weeks previously. We had been unable to identify it and had assumed that it was some form of hornet: however we did notice that it only seemed to feed on the Devil’s bit scabious, although it was seen to land on other types of flowers. Andrena marginata is one of the rarest and most endangered bees in Europe and although it is mostly found in southern England a few sightings have been made in the Highlands in recent years. It is a solitary bee which makes nests in old wood etc and for the first time ever we actually saw evidence of a nest such as this in our garden at the begining of August approximately 2 weeks before we saw the Bee itself.  We will only be able to confirm our sighting if we can find photographic evidence amongst the images taken over the summer; however the mere fact that we have potentially stumbled across two rare specimens within feet of our base has spurred us on to try and identify all of the bugs, insects, birds and beasties we have encountered. We already know that a type of Gull normally only seen as far north as Fife has been sighted less than three miles from here in the last week or so.

Only days after finding our caterpiller we were delighted to have two members of Wild Things, an Environmental Educational Charity specialising in giving youngsters opportunities to experience outdoor activities,  undertake a Wilderness Skills Taster Day on Ardersier Common with us.  A thoroughly interesting and fun time was had by all as we made and drank Blackberry tea, played animal naming games, made stone paintings with berry juice, looked at differing trees and plant life in the common, listened to stories, toasted marshmallows having wilted our own toasting sticks, baked bread, learned how to set a fire and leave no trace, make charcoal drawings and a woodland/coastal mobile to celebrate autumn. 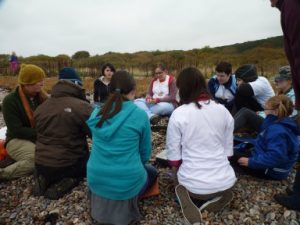 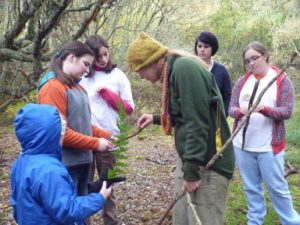 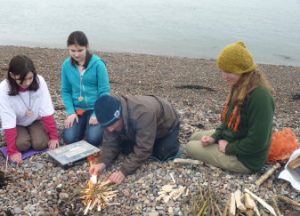 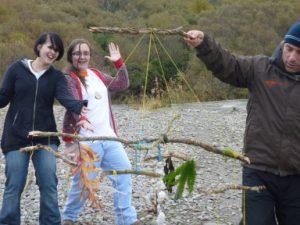 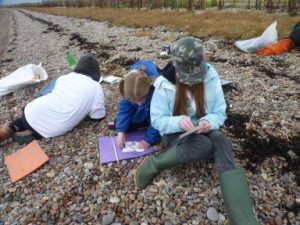 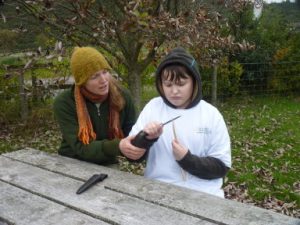 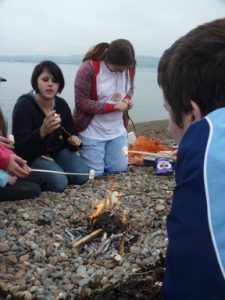 Along side our close consideration of a wild place close to us we have also been thinking about traditional crafts and two of our members had a fantastic morning learning how to dye wool with  Eda Grant, a Natural Dyer and Hand Spinner expert. The results were strands of wool which appeared to reflect the colours of Autumn. Eda has not only invited the two members to a session of the Spinning Club she attends she has also agreed to give a talk to the whole team. Another successful undertaking! 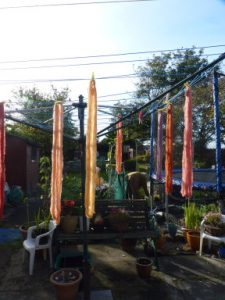 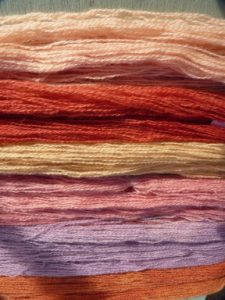 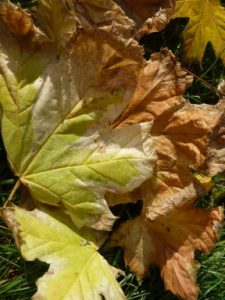 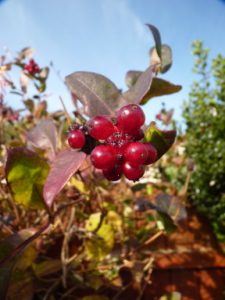 We have some very exciting events coming up including  conducting a “Green Haloweenan” Day at another of our local Tesco Extras as well as running an accredited Voting Centre in the forthcoming Right Blether Ballot of all Scottish youngsters; the outcome of this ballot will decide what issues the Scottish Commissioner for Children and Young People will tackle over the next four years.