Things are beginning to pick up a pace and I thought I would spend a few moments catching up with our latest goings on and to write a little something about Ric O’ Barry and the situation in Japan. I have written before about our using local libraries for display purposes and thought that our fellow agents might be interested in actually seeing photos of these. 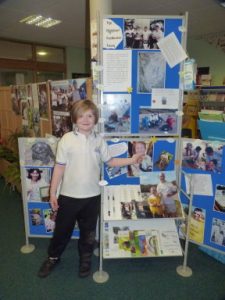 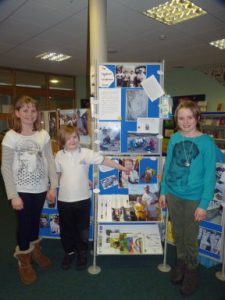 Quite by chance we find ourselves with a subsidiary branch in Buckinghamshire and we are looking forward to engaging with our agents there. They will adhere roughly to the Highland Facilitator Team’s agenda and will be supported and encouraged to undertake joint projects, which we hope will in turn lead to increasing independence and the eventual establishment of their own group. I have been a little slow in our response to their requests for inclusion but hope that they appreciate that this is caused by prior commitments and we thank them for their patience in this matter. Apart from anything else The Highland Facilitator Team has been heavily involved in the creation of stronger ties with local groups and organisations and I will write a special report about this in due course. Rhona Brindle our Tesco Community Champion was recently nominated Tesco Community Champion of the Year and as part of her prize was given additional funds for use in her local area. We are extremely grateful that she deemed our endeavours worthy of support and cannot thank her enough for her contribution to the team. 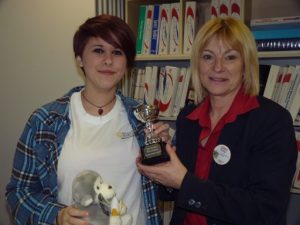 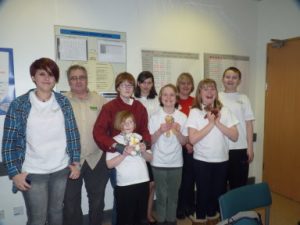 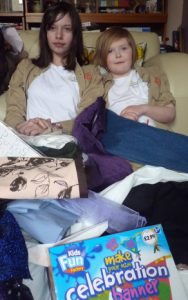 It was only through reading an article about Rhona’s success that we were made aware of her other voluntary work and a decision was taken by the group to aid her in this. Rhona has spent each of the last five summers assisting children in Romania who are HIV positive and although we are going to provide art materials for them, we once again thought out of the box and felt that perhaps one way we could help was by supplying new clothing to the adult helpers, many of whom live in extremely poor circumstances. These individuals give so much of their time and energy to helping the children in their care, that they do not have the facilities or resources to pamper themselves and we just wanted to show them how much their work is appreciated.

Senior members of the Highland Facilitator Team then approached numerous shops in the area as well as attending sales etc and with the generous help of “Barbara the Gardener” we were able to purchase many pieces of clothing for no more than £1.00 per item. These and all other goods will be presented to Rhona for distribution as she chooses.

Last weekend a number of team members attended the Highland Environmental Network Conference in Fortrose. It was an extremely interesting event and during one of the workshops our young people were exposed to an element within the environmental community whom we had yet to come in contact with; namely those who not only passionately believe that there is no place for youthinvolvement at any level in environmental undertakings, they can see no worth in small enterprise endeavours. We were completely taken aback by the absolute dismissal of all that we hold and believe in as members of Jane Goodall’s Roots & Shoots Programme, and I must therefore highlight the resolute defence given by Amy Robertson, the current Jane Goodall Individual Endeavour Award Winner. Amy and others were able to counter with hard and indisputable fact the sheer size of youth involvement in this country and around the globe, and the amazing results they are achieving. Such was their ability that throughout the remainder of the day they were congratulated by many delegates, who said that not only did they agree with our position, some had even had their opinions changed.

I received an e-mail a few days later from  Caroline St Johnston, Administration Officer (Climate Change) Sustainable Development Commission Scotland, with regards our experience whereby she stated that she was glad that Amy had the strength to stand up to people who clearly had differing viewpoints. I should point out that the opinions expressed during the workshop represented the view of a few and not those of the Highland Environmental Network.

Howling gales and heavy snow falls in recent days have made it is a little hard to concentrate on the fact that spring has definitely sprung. Thankfully most of our undertakings continue to be indoors at present although we are going to have to brave the elements and tend to the garden in readiness for the coming season. However, the difficulties we have experienced are as nothing compared to the catastrophes which have assailed Japan.

As a group living in such close proximity to the dolphins of the Moray Firth we have always taken a keen interest in the work of Ric O’ Barry, the director of Save Japan Dolphins.org, and his team. They have campaigned to put an end to the Japanese drive fishery slaughter of dolphins as well as attempting to stop the capture and live trade of dolphins to zoos and aquariums around the world. Many of you may have seen the Oscar-winning documentary The Cove which highlighted the appalling practices which Ric and his team strive to abolish. The Cove movie focused on the town of Taiji and the brutal dolphin drive hunt, which kills 1500 to 2000 dolphins annually. Many of the dolphins killed in Japan are offshore Dall’s porpoises, one of the fastest of the dolphin tribe.  But not fast enough for dolphin harpoon boats.

Save Japan Dolphins is active in creating worldwide pressure against the Japanese dolphin slaughter and to date they have generated petitions with more than 2 million signatures from 151 countries.  The team is also involved in investigations and monitoring at the Cove and in exposing the toxic mercury in Japanese dolphin meat products. However, much of the hunting of Dall’s porpoise takes place in Iwate Province in northern Japan and Save Japan Dolphins’ Brian Barnes recently headed up to Iwate to report on the dolphins being killed there. On the morning of 11thof March 2011 Brian filled his report, only to find that mere hours later he and his team were at the epic centre of the biggest earthquake and subsequent natural disaster Japan has ever faced. In the moments following the quake the team immediately headed for higher ground, witnessing as they did, the massive tidal wave which swept away the Iwate town of Otsuchi in the valley below them. The survival of the team has been put down to the overwhelming generosity of ordinary Japanese people in the midst of extraordinary circumstances. Thankfully news is now filtering through that like Brian many of Ric’s colleagues in Japan are also safe, if shaken by all that has occurred.

We like many people have enquired in recent days about the safety of the dolphins and whales of the area and have been reassured by reiteration of the information that whilst the colossal debris does not help the pollution load in coastal waters, the most damaging areas in a tsunami are at the shoreline so most deep-water sea life should not have been impacted. Ric O’ Barry, a man who has been harassed and victimized in Japan for his actions was recently quoted as saying “Our campaign is not against Japan or the Japanese people. Our campaign is not about hate, but about helping dolphins and the people of Japan”. The Japanese coastline has been ravaged and search and rescue efforts continue in a country confronting the very real possibility of a full nuclear meltdown. Natural disasters can and do occur, and the lessons we learn and the way we react to these situations tests us all; like many environmentalists we are dedicated to protecting the lives of whales and dolphins in Japan, however now is the time to show openhanded humanitarianism to those faced with the utter destruction of all that they knew.

Donations in aid of Japan can be made via Ric O’ Barry’s own organization, all you need do is go to japandolphins@earthisland.org and click on Donate.   If you do chose to contribute to Ric’s informal fundraiser he asks that you send him an e-mail and he will add your contribution to the grand total.