The greater part of our endeavour over the last few months has undoubtedly been our investment in community issues, highlighting the need for greater endeavour with regards the care of our environment and local wildlife. The team have taken part in public awareness days, carried out workshops with numerous youth organisations and raised the profile of Jane Goodall’s Roots & Shoots Programme where ever and whenever we can. 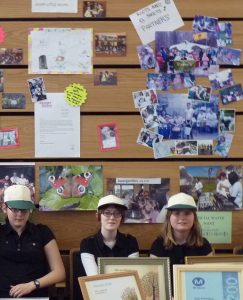 We have fostered closer ties with our American Partner Group Seneca and if it had not been for some unavoidable delays would already be well under way with our first joint project. Work is also underway for the development of yet another international partnership involving our team and having made contact with a number of other groups around the country we look forward to progressing ties with them as well.

Within our own region the Highland Facilitator Team has been in close discussion with local groups involved in the promotion of care in the community and it is hoped that these discussions will lead to a joint venture.

We have had the honour of meeting Dr Goodall twice within the past three weeks with our first meeting coming about as a result of our being unable to attend the award ceremony in December and Dr Goodall’s invitation at the time, to meet her in St Andrews in May. It was an amazing day which began with our being invited to take part in a workshop with some of the best students St Andrews University has to offer! It was such a treat and whilst Tara and Dr Goodall both spoke passionately about the Roots & Shoots Programme, we were captivated by Dr Goodall’s reminisces of her childhood and the influences behind her career choices.

The role of the Highland Facilitator Team was noted in glowing terms on more than one occasion which was very humbling. Dr Goodall was interrupted on a number of occasions by one member of our group who is Autistic. It was seemingly a first for her and despite the shocked intake of breath from those gathered she dealt with his questions with great aplomb.

Dr Goodall told us afterwards that she had thought it highly amusing and noted on more than one occasion during the day that she had welcomed his interruptions as it meant that she at least knew that he was not only listening to what was being said but that he also had prior knowledge of her work. So much of her time is seemingly spent addressing rooms full of people so completely in awe of her that she is never sure if they really hear what she has to say.

Again I would love to say that being interrupted was the only “first” of the day for Dr Goodall but no, and I now know the truth in the saying never work with animals or children, as having answered numerous questions from the floor Dr Goodall finally said “anyone else” and our youngest members hand shot up.

I have no idea what it was I expected her to say but I doubt that anyone in the room could have predicted her request of “can I have a cuddle?” Dr Goodall duly gave her, an enormous hug to the delight and amusement of the audience.

There was a brief lull after the Workshop as Dr Goodall was whisked off for an interview and we were taken upstairs to wait for our meeting with her. When Dr Goodall joined us our eldest agent showed her a selection of photos we had brought along illustrating our work and Dr Goodall and the others present seemed delighted with everything the children were doing.

We spent about 20 minutes or so with Dr Goodall before she had to leave to prepare for the lecture that evening and just before she disappeared from view, she turned her head and gave a short rendition of her famous chimp call grinning widely at the children’s surprised laughter as she did so.

Dr Goodall exuded such an amazing sense of calm and passion during her lecture that you knew you are in the presence of someone very, very special.  She captivated young and old alike and the thing which struck me the most was just how simple her message really is.

Our second encounter with Dr Goodall occurred a few weeks later, when we were invited to take part in the 50th Anniversary Celebrations commemorating Dr Goodall’s work the chimpanzees of the Gombe National Park. The event was held in Bournemouth which necessitated a round trip of some 1500 miles for us. We had prepared a number of pieces of art for the Art Exhibition whilst also hosting the largest display of our work we have undertaken to date. We had actually arrived in the area two days before and having hired an entire tepee village spent Saturday conducting a workshop of our own with numerous friends and family which culminated in a large barbeque in the evening and the building of a shelter in the dark!

Sunday was a fantastic occasion for us as those members of our team who live in England were able to join us for the day along with more friends and family, including Barbara the Gardener.  Dr Goodall held a workshop in the morning as well as spending time with each of the teams, who like us were representing the work of the Roots & Shoots Programme through their displays.

The day was of course a celebration of Dr Goodall’s 50th Anniversary of association with the chimpanzees of the Gombe National Park and we were especially pleased when Dr Goodall took time to look over our project about her “Lost Diaries”. 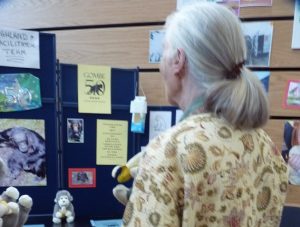 We had never encountered other teams before and it was actually the first time we had a sense being a part of something bigger than ourselves. It felt really good to belong and to finally have an opportunity to network. 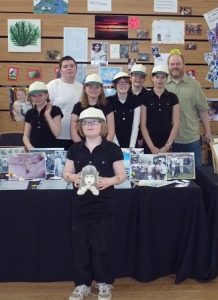 Dr Goodall once again showed care and regard for the children of our team, as did members of her immediate family; and the atmosphere throughout the day was more akin to a large family get together than anything else.

This feeling carried over with the showing of Dr Goodall’s new movie; it was utterly enthralling, beautifully filmed, honest and so poignant that it begs the question of not why should we follow her vision but rather how could we not.

However, there was a moment at the end of the day which spoke more than any words can about the utter humanitarianism of Dr Goodall because in the midst of what must have been an emotional day for her the boy who had interrupted her in St Andrews and who had just studiously ignored her for the whole day, tentatively flurried his fingers towards her across the foyer and she responded in kind.

She matched his actions exactly when he blew her a small kiss and I don’t remember how it came about but suddenly they were in an embrace of such tenderness and trust. It was an entirely private moment and I don’t know if anyone else even noticed against the melee of people milling around. I would have missed it entirely if it were not for the fact that he is my youngest son and I always have half an eye on him when we are out and about.

No words were spoken by either of them throughout, and when I asked him later why as a boy who is hardly ever demonstrative what it was that had drawn him to Dr Goodall, he looked into the distance for a split second and then with a tiny smile on his face said…

And I would hazard a guess that this is the reason why chimpanzees trust her, children want to dedicate their lives to her and why we should all look forward to the continued success of the Roots & Shoots Programme.