The severe storms in recent days have left our Pond destroyed, Green Houses up ended and Plants cast aside like pieces of grass. Many of our bushes and young saplings have been badly scorched by the high winds which battered the region prior to the torrential rain which later fell. 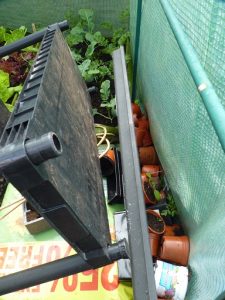 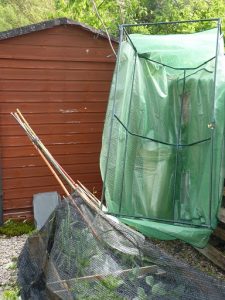 It makes little sense then to now describe all of the hard work and effort which had gone into preparing for our participation in the Gardening Scotland Show due to take place at Edinburgh next week.

However, it is the loss of our food supply to Nick Martin and his Creepy Crawlies which is a stark reminder to all, of just how desperate a situation this would be if it were a family caught up in this disaster without hope of rebuilding for lack of resources. It is early enough in the season (just) for us to salvage much from the damage and work has already begun to take down broken tree branches, reset bean poles, to remove destroyed vegetation and to plant new crops. 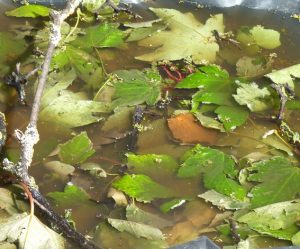 Thankfully, our new row of raised beds appears to have survived intact despite having a Green House land upside down on one of them, twice!  It means we have fresh areas available for immediate planting and can crack on without delay. We are very excited about the beds as they have been arranged from full sun to partial shade and we will be able to plant crops across the whole spectrum because of this.

We are in the process of converting an old shed into a potting area, much closer to our area of work, and which will hopefully enable our agents to spend more time observing and making note of butterfly and bee movements, especially in our wild garden. The decision was taken at the end of last year not to intrude in this area and to see what re-emerged this spring. True to expectations many of the flowers and grasses seen last year have grown back and have proved remarkably resilient to the recent weather with many flowers bursting into bloom all over. 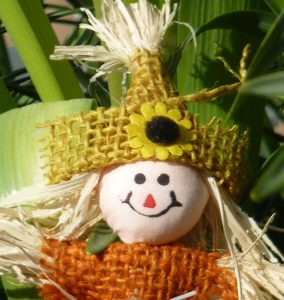 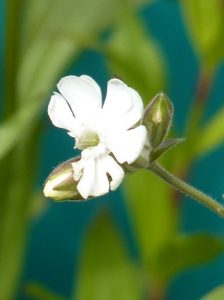 We have also taken note of the distribution of flower types from this very contained area and have begun to encounter plants known only to be within the wild garden in other areas across the whole of the garden.

A number of none indigenous trees were removed from the garden in recent weeks and plans are underway to utilise the space revealed to form a rockery come sensory garden area. We had hoped to provide sensory equipment to a local school but were meet with a firm rebuff and have therefore decided to use the items ourselves; as they will be of benefit to those children of our own group who have sensory issues.

In recent months the team have been in contact with numerous woodland based organisations and groups and arrangements have been made for the group to spend some time this summer with a local Community Woodland Trust undertaking work for the benefit of said a woodland area. We are also going to undertake a number of woodland awareness days as part of our follow up to the discovery we made of a rare Sawfly, on Ardersier Common last October.