On Sunday 22nd May Bournemouth resident Dr Jane Goodall DBE, Founder of the Jane Goodall Institute and UN Messenger of Peace, celebrated her life and work at Bournemouth University. Young people involved in conservation projects thanks to Jane Goodall’s Roots & Shoots programme, showcased their work in her honour. Artists exhibited unique pieces inspired by Jane’s achievements, and a film of Jane’s incredible life journey was shown.

Young people from around the region, who are participants in Jane Goodall’s Roots & Shoots Programme, started the celebrations by showcasing their work for people, animals and the environment from 10:30am to 12:30.  The programme was founded by Dr Jane Goodall over 20 years ago in Tanzania,  and now has over 10,000 branches around the world and over 1200 groups in the UK alone.

At 2.30pm the event opened for the public to check out the display of unique and beautiful works donated by local artists (sales of which benefited the Jane Goodall Institute UK’s conservation work), music and merchandise stalls.

As one of the world’s foremost scientists it is appropriate Dr Goodall has chosen Bournemouth University as the site for this special day. Bournemouth University didn’t exist when Jane Goodall read for her PhD at Cambridge, but it is now the No.1 New University in the UK, and it is fitting that Bournemouth’s leading citizen should be honoured at such a progressive institution in her home town.  The state-of-the-art Kimmeridge House lecture complex (including the reopened Marconi Lecture Theatre) was only opened at the beginning of this year.

Jane Goodall is one of the most famous and celebrated scientists in the world, yet still comparatively little known in her home country and town.

Dr. Goodall through her studies of wild chimpanzees in Tanzania, has revolutionised the way we think about our relationship with the rest of the animal kingdom. She has written many internationally best-selling books (mostly penned in the family home initially bought by her Grandmother on Bournemouth’s West Cliff) and travels the world for over 300 days a year campaigning on environmental and humanitarian issues.   She has received almost 40 Honorary Degrees and many international awards including  Dame of the British Empire, France’s top honour, Officier de l’Ordre de la Légion d’Honneur, and been presented with such awards as the Kyoto Prize, the J. Paul Getty Wildlife Conservation Prize, the Benjamin Franklin Medal in Life Science, the Gandhi/King Award for Non-Violence, the International Peace Award, Spain’s Prince of Asturias Award, Tanzania’s Medal of Honour, IUCN Gold Medal, and the Commonwealth Award for Public Service, and is a UN Messenger of Peace.

“It is hard to believe that 50 years have passed since I began my study of the chimpanzees of Gombe,” said Dr. Goodall.  “Half a century of amazing discoveries have helped us redefine our place in the natural world.  And most amazing of all is knowing how much more the chimpanzees have to teach us.  I look forward to moving into the next half century.”

“Gombe 50” is an international celebration marking the 50th anniversary of Jane Goodall‘s ground-breaking chimpanzee research at Gombe Stream National Park in what was then Tanganyika, now Tanzania. When Jane discovered that chimpanzees use and make tools, her mentor the renowned anthropologist and palaeontologist Louis Leakey said: ‘We must now redefine man, redefine tool, or accept chimpanzees as human!’ We know a great deal more today about the biological and behavioural similarities between ourselves and our closest living relatives the chimpanzees. Today, the Gombe research is one of the longest running studies of animals in the wild, providing extensive insights into our closest relatives’ emotions, behaviours and social structures.  But Gombe represents so much more.  The ongoing research and the extensive conservation work carried on there by the Institute are helping answer such compelling questions as how certain diseases are spread, how to stop forest destruction, which contributes to climate change, and how to improve the plight of women in developing countries.

The Jane Goodall Institute (JGI) UK, founded in 1988, inspires and empowers individuals to take informed compassionate and effective action to make the world a better place for people, animals and the environment. With the first global office founded in 1977, the Institute is a global leader in the effort to protect chimpanzees and their habitats. It is widely recognized for establishing innovative community-centred conservation and development programmes in Africa, and Jane Goodall’s Roots & Shoots, the global environmental and humanitarian youth education programme.

Jane Goodall moved to Bournemouth with her mother Vanne and sister, Judy in 1940 to share her Grandmother’s home in West cliff area.  Judy, with her daughter and two grandsons live in the same house, and it is here Jane still returns in between trips for the few days when she is not ‘on the road’. It is in Bournemouth that Jane has written her best-selling books, including In the Shadow of Man (1971) , Through a Window (1990) and the ‘Hope’ series Reason for Hope (1999), Harvest for Hope (2005) and Hope for Animals and Their World (2009). She has also written a number of books for children. 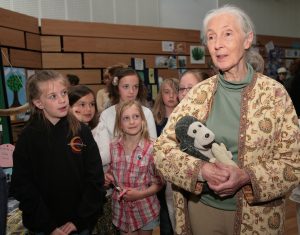 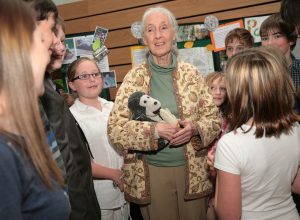 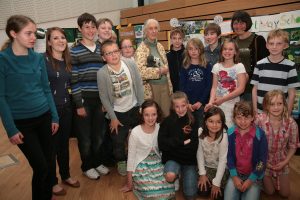 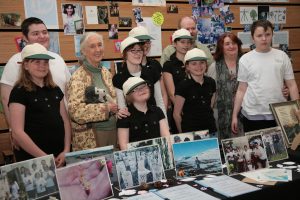 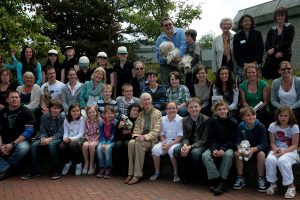 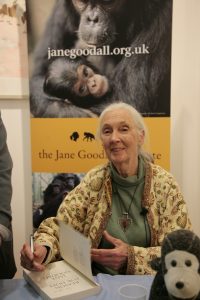