In November 2010 at the invitation of Transition Town Andover and Test Valley Borough Council, members of the gardening club represented the school by planting a fruit tree and crocus bulbs in the local community orchard.

In March the trees were moved from the school tree nursery where they had been growing for a year. The ninety children who had planted them in Y5 and were now in Y6, dug them up and moved them to their final planting site in the nearby leisure park.

New trees will arrive for planting in the now empty nursery at the end of the year. These will be planted in what we hope will be a new woodland for the town as part of Andover Trees United.

Between March and September, the Eco Councillors had 4 training sessions with our Hampshire Recycling Officer. They learned why it is important to reduce, reuse and recycle. They carried out an audit of our rubbish to find out whether we were sorting things properly and they learned what we can and can’t recycle in school. An action plan was written. The first action was to introduce a compost caddy and recycling bins in the staffroom.

Year 4 visited a local eco building site. They were given a tour of the site and learned about how the site had been carefully cleared of wildlife before work began. Slow worms had been relocated. A green barrier was then put up to prevent wildlife from re-entering the site whilst building work was done.

The children learned that timber is a good renewable building material, that insulation is important and that the houses were to be fitted with renewable energy systems.

To encourage wildlife to return, there will be bird boxes and green roofs. 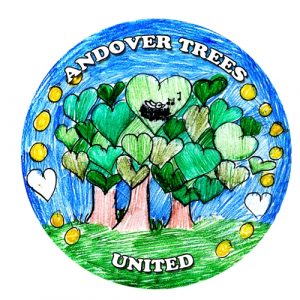 We are one of sixteen local schools that are uniting to plant trees together to make a new woodland and community green space for Andover. We were the first school in the town to build a school tree nursery with trees provided by the Earth Restoration Service (ERS), and this autumn 2011 will see 15 more schools join the ERS to celebrate the International Year of Forests.

We have all agreed to work together for at least 5, hopefully 10, years to plant tress in the community. The woodland that we will start to plant next year will commemorate the Queen’s Diamond Jubilee. Lots of people are helping us, including the Woodland Trust, the Forestry Commission and Earthwatch.

Children at Portway designed the logo, the poster and the official tee-shirt for the project.

When the pupils at Portway discovered that an ex-pupil had suffered an attack that had left her disfigured but that she had courageously gone on to rebuild her life and set up a charity to help others whose lives had been affected by disfigurement, they decided that they wanted to do something to help.

The school council organised a silly sock day and a spellathon to raise funds for her. 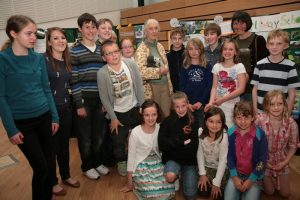 The highlight of our year was attending a special event in Dr Jane Goodall’s home town of Bournemouth, where we met Dr Jane and talked about our Roots & Shoots work at Portway Juniors.

This is what two of our pupils wrote:

On Sunday, 22nd may, we went to Bournemouth to see the one and only Dr. Jane Goodall.

The reason we went was because we won a gold medal so we got to go and see her.  We also gave her paintings of what we thought would make her proud and interested.

However, we also got to have a personal talk and tell her how we care for the environment, animals and other people. As a present we got a grey Mr H Junior monkey, for all the work we have progressed in the last 5 years.

At 4:00 there was a film about Dr. Jane Goodall, and what she has been doing over the past 50 years. Also we could buy some fantastic books that tell us about what she has been doing her lives work on. AND she was signing them! Even though she had a broken wrist she didn’t moan but she did say sorry it might not be my greatest hand writing.

Inspired by their visit to Bournemouth to meet Dr Jane Goodall, an after-school Roots & Shoots club was formed. The first thing they wanted to do was raise some money to send to JGI and to fund a school project.

One of the children offered to dress up as a chimp (but we could only get hold of a monkey outfit – our own Mr H!) and the rest ran a Pin the Tail on the Monkey game that they had designed and made, (well, chimps don’t have tails do they?), and a Guess How Many Sweets in the Jar game.

Over 100 people joined in and learned about Dr Jane and how we had been to meet her.

Believe it not, this is our pond!

The children remembered using it when they were in the infants and were upset to discover that it had been neglected. They decided that they would like this would be their environment project. Some of the money raised at the fete will pay for a visit later in the year from the Hampshire & Isle of White Wildlife Trust to talk to them about ponds and how to look after them.

Part of our Recycling Action Plan, devised with the recycling officer, was to raise awareness both at school and at home about what can be recycled.

To start the week, the Eco Council led an assembly about Recycling and organised a Big Tidy Up across the whole school. A prize was given to the class that provided the most volunteers and the grounds were cleared of over 10kg of litter.

To end the week, a whole school ‘dress in something green’ day was organised. Payment to come in green was to bring something that could be reused by others or recycled to save precious resources.

Thirteen bags of clothes and shoes were donated to Hampshire Air Ambulance, a sack of aluminium was collected for the local Magpie Community Trust, over 40 mobile phones were brought in and a bag of stamps was taken to Oxfam for passing on to their nearest specialist stamp shop. We even saved socks to make sock puppets for the reception class children’s welcome bags.

The Roots & Shoots club researched what conditions make a good snail habitat, brought in a host of materials from drain pipes to old pillows (good for absorbing water they thought), wheel-barrowed up a remnant of carpet from the bottom of the field, begged a wooden pallet from our site manager and set to work.

The first snail moved in overnight! 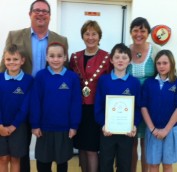 Now in its 6th year, gardening club members were rewarded for their hard work and dedication by receiving, on behalf of the school, a Test Valley in Bloom gold medal. Read what Headteacher Tim Deery wrote for the school website:

‘Portway has been awarded a Gold Award in the Test Valley in Bloom 2011 Awards. This is a great achievement by everyone in the school and in particular the gardening club, led by Mrs Pridmore, Mr Cantillon & helpers. Jake Fennell, John Price, Annie Harris and Molly Young represented the school at the ceremony and, as expected, did a great job. We were only one of 2 schools out of 55 to achieve the top award!’

The judges said, ‘Fantastic commitment from staff, volunteers and students. So great that we struggled to think of any way in which the school could improve on what they are doing!”

A new school year has already seen the formation of a new group, here seen beneath a rowan tree, one of the trees we are monitoring as part of the international BEAGLE PROJECT, that seeks to collect data about 6 native British trees in a long-term study of trees and changing climate and weather patterns.

What else have we done?

We look forward to a new school year and the challenges it brings. By this time next year we might even have solar panels!