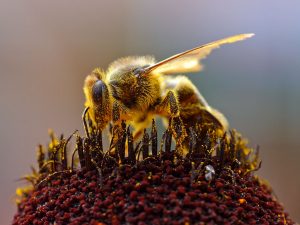 Having just returned from a month travelling, I was concerned that the bees might have felt neglected whilst I was away. Had they survived the Winter? Could they have swarmed? I needn’t have worried.

In my first proper inspection of the year, (in those few sunny days we had this month) both colonies of bees proved alive and buzzing. Although I didn’t manage to spot them this time, both Queens (Beatrice and Donatella, since you ask), were laying eggs – like tiny white grains of rice standing upright in their cells. There was also a healthy amount of brood (bee larvae), in all its developing stages. Fluffy baby bees were emerging from cells ready to start their cleaning duties and all looks well.

Food is a problem though. There are bright yellow fields of oil seed rape in sight of the hives. One hive has spotted it and the bees are bringing in lots of nectar which they are storing in the “super” frames above their brood nest. These guys are all right. If the weather turns bad (which as I write it has), they have stores available to keep them going as they convert the nectar into honey. The other hive is slightly slower off the mark. They have used up all the stores of sugar syrup that we gave them in the depths of Winter but haven’t yet started to build up reserves for Spring. I make a note to bring them a snack later this evening.

What about disease? The curse of the honey bee is the varroa mite. Almost invisible to the naked eye, it is a shiny red crab like object that sucks blood from the bees and weakens the colony. I can’t see any lurking on the bees, although I don’t really expect to. Nor do I see any in the sealed drone cells I check (these cells are bigger to accommodate the larger, male drone bees – and therefore can also fit more varroa mites). I don’t want to be complacent, so I slide in a varroa board to check. This is a plain insert, which slides underneath the bottom of the hive enabling me to count the number of mites that fall off the bees and drop through a narrow mesh onto the hive floor. I can then calculate the total numbers likely to be in the hive. Fingers crossed it wont be too many…