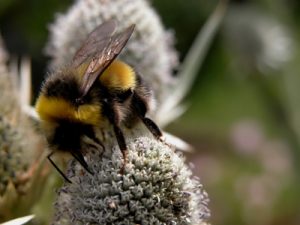 Bleugh, anyone else really suffering from hayfever at the moment? We all know that hayfever is caused by pollen, and that different pollens cause reactions in different people, but what is pollen?  Flowering plants reproduce by creating seeds, and when those seeds are planted they grow in to new plants.  To make the seeds, pollen must first be transported from one plant to another.  Some plants rely on the wind to transport their pollen (hence the hayfever), but many others use insects such as bees, who travel from flower to flower, to transport pollen from one plant to another.

Ever wondered why flowers are so bright and pretty? One theory is that flowers evolved to be bright in order to attract insects to them, and once attracted to the bright flower, the pollen can stick to the insect and be carried from flower to flower.  Flowers first evolved about 150 Million years ago, while dinosaurs walked the earth, and for a while scientists believed that dinosaurs were a large factor in the evolution of flowers although this theory has been largely disproved and now scientists believe that mammals and insects had more to do with it (just as important but sadly a lot less cool).

But back to the bees.  Did you know that the buzz of the bee is a perfect mechanism for releasing pollen?  The buzz you hear from a bee, or another winged insect is the sound of their wings moving very quickly to allow them to fly.  Some bees also vibrate their thorax (body), and these vibrations shake pollen from a host plant. Once the pollen is free it is more likely to stick to the bee and be carried away. Clever, eh?

Some plants, such as tomatoes and blueberries have evolved to be pollinated better by buzzing insects.  So, it’s important to look after our bees as if we allow bees to die out, the survival of buzz reproducing plants will become a problem – can you imagine a world without tomatoes and blueberries? It’s hard isn’t it, as such a large part of our diet relies on fruits that need bees to reproduce. If bees die out then humans will have to adapt to a very different ecosystem and foods that we now think of as common and easy (pizza, pasta sauces, ketchup) will become a lot harder to produce.

So, now you know how important bees are you should take a look at our bee garden activity and see what you can do to help!