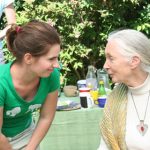 Katalin Csatádi was instrumental in setting up the charity in her home country, and she’s now back with the organisation in the UK thanks to World of Difference. We find out more.

“The Jane Goodall Institute (JGI) is an international non-profit organisation and I was lucky enough to be one of the founding members of JGI in Hungary, my home country,” explains Kati. “After spending several wonderful years with the charity in Hungary, my life took me to the UK as I am marrying an Englishman.”

“The Jane Goodall Institute means more to me than a place to volunteer – it gives meaning to my life,” says Kati. The charity works with conservation, looking after animals such as chimpanzees, and helps to educate children around the world.

“I know that I am making a difference and I am proud to be part of the institute. When I moved to England I knew I didn’t want to leave the organisation, and therefore I got in touch with the Director of JGI UK to see how I could help here.”

“Being part of the JGI family and making a difference through the organisation was my main motivation,” says Kati. Lots of our World of Difference winners have already recognised the importance that social media has to play when it comes to shouting out about charity work, and Kati is taking to Facebook to interact with supporters.

“I am primarily helping in fundraising and the best part was brainstorming about how to use Facebook as a marketing tool. I believe we came up with some great ideas that our Facebook followers will hopefully love!”

Most people who work with charities dream of actually making a difference to people or animals in need, but a lot of charity work still comes down to fundraising. As we found out when we spoke to Siphia Giblin, who set up the Clear Sky Children’s Foundation, funding can be sourced through a number of different mediums.

Kati already has a host of proposals for making money, and tells us: “I would like to prepare five funding proposals before the end of my contract. I am nearly done with three so hopefully I’ll be able to do the five!”

“Charity work is in my blood, I am certain that one way or another I will do voluntary work after the World of Difference programme finishes.”