YOU’RE NEVER TOO SMALL TO MAKE A DIFFERENCE.

This account, written by Agent H and a number of Chrono-bots illustrates some of the small measures we have taken during the summer term to increase students’ understanding of animals, people and the environment. We know we only have one planet and we know that most of us live as if we had at least three. We know that small changes add up, and we have therefore called this year’s project ‘You’re never too small to make a difference’

A DAY OF FUN

We will begin our description of summer term events, actions and activities with something that straddles the ‘community’, ‘animals’ and ‘envrionment’ divide; a day of fun with Year 5 and 6 children from a nearby village school.

Working with another Green Flag EcoSchool promised to be a delight, especially when that school was a small village school called Morgans Vale. The Morgan’s Vale children were to shortly enjoy a week at the wonderful Minstead study centre and we were invited to plan, run and deliver workshops that would run on one particular day. So it was that twelve lucky Ringwood students from Years 8 to 12, each of whom had skills and knowledge to share, were chosen to work with the youngsters. We chose those who had contributed most to people, animals or environment work. In an hour long session during a perfect summer’s afternoon, students jointly planned workshops on biodiversity, global dimension, energy and recycling. We were ready to go!

And on beautiful summer’s day, perhaps the best day of our very poor summer, students went to Minstead with four workshops focussing on animals, people and the environment. These they felt confident in running and would be of real benefit the youngsters. They included a Fairtrade workshop that involved children ‘taking a step’ – their first steps in Fairtrade. Students were keen to share their experience, so prepared a presentation, baked cakes and foot and hand painting on Fairtrade cotton were much enjoyed! The latter activity marked the Fairtrade Foundation’s ‘Take a Step’ of 2012.

The energy workshop was challenging for Ringwood students. Everything from the low technology windmills to solar power, solar water heating and a hydrogen car was nuch enjoyed. Recycling and reusing was the only workshop that took place indoors. After a short ‘what can we recycle?’ exercise, children were soon reusing by, for instance, making scrap pads from Ringwood’s mountain of nearly-wasted one-sided photocopying paper, and recycled jewellery.

The biodiversity workshop was hugely enjoyed as it involved pond dipping in Minstead’s large pond, and subsequent species identification. We had some expert students Students also ran a messy water-based game that to show a difficult concept in food chains.

Ringwood students were great. Not only did they plan and run the workshops, but when things didn’t go quite to plan, they changed course. With amazing flexibility, they devised a new activity or a game on the spur of the moment!  The Morgans Vale children were delightful and well-informed. Each has written a ‘thank you’ letter to our students, all of whom would love to run an action replay of the day! This was a perfect day and the photos (next page) give some idea of the learning and thethe fun experienced by all. 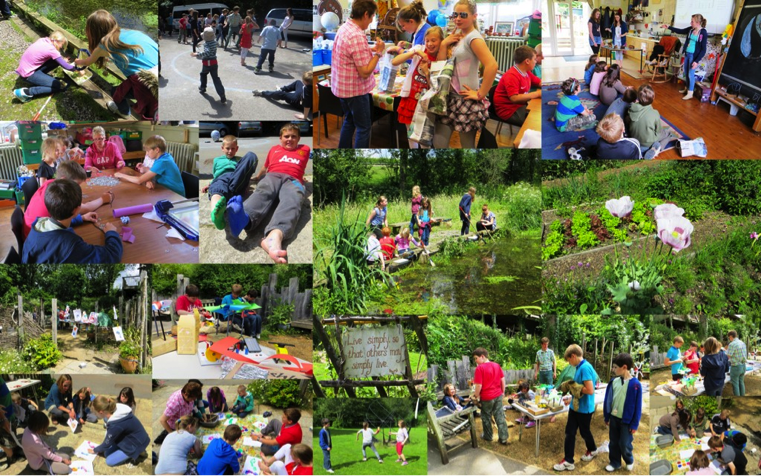