Food chains underpin all life whether in Ringwood or Africa, and we cannot neglect wildife in our own backyard. We invited Jason Bridges of Liberty’s Reptiles and Raptors into school. He brought in three birds of prey for the second time this year and by examining the contents of birds’ dissected pellets, students considered whether our habitats will sustain the ecosystems that these birds depend upon. In some cases, students were able to pice together whole skeletons! Jason, of course, gave a fabulous talk to students and we are really grateful to him.  The photos show students examining the contents of the pellets! 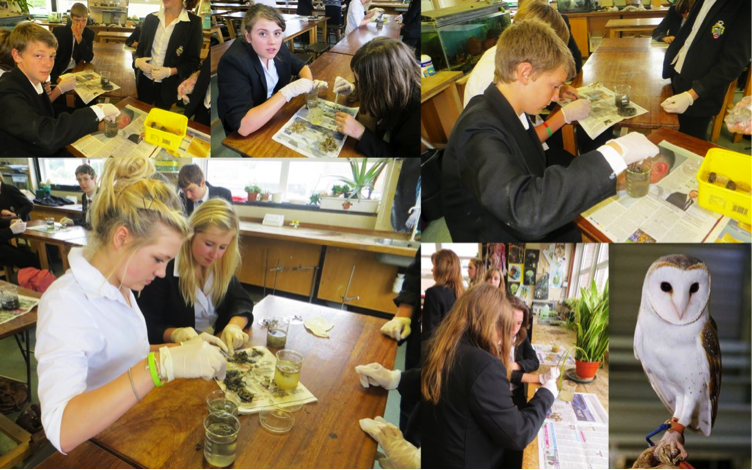 Polly Whyte, from Hampshire and Isle of Wight Wildlife Trust returned to her old school to lead an excellent workshop that illustrated the importance of the seas around our local coastline. Students were surprised by the number of products that come from the sea – and not just the obvious edible products like fish! Polly gave students a short exercise is determining whether a product came from the sea or not.

Students heard that our marine environment is subjected to a barrage of potential threats and human impacts like climate change, fishing and dredging. So a marine conservation programme has been set up in the Solent to help protect these seldom-seen inhabitants of the underwater world.

Polly explained that there is great beauty under our surface waters, and Polly she illustrated the best and the worst of our coastline. Students finally created a fishing net display item for one of the Wildlife Trust’s information centres. We were able to keep a second net and plan to make good use of it next term when our Chronobots will lend support to HWT’s marine conservation programme. http://www.hwt.org.uk/pages/marine-2.html

We know that moths have fared badly this year so National Moth Night was particularly significant.

Moth Night is an annual celebration of moths that took place on three days and nights; 21-23 June 2012. It is a time when enthusiasts across the UK light their lamps, record moths and organise public events. The special focus this year was on brownfield sites. These often unappreciated brownfield sites, such as old quarries and pits, disused railway lines and spoil tips, are wildlife havens. Although we have no brownfield site at school, thanks to Ann Fullick and entomologist Tony Short we had our own moth trapping evening! June 21st was warm, but by 11.00pm, on this midsummer’s night, it was pouring, so we were pessimistic about the outcome. We knew the effect of cold, wet weather on these invertebrates. In fact, we’d read a Roots and Shoots blog about it. However, our trap had caught a few moths that we rescued quickly before they drowned. Amongst them were two of the most beautuful species possible: the elephant hawk moth and the buff top moth that looked so convincingly like a birch twig that students were almost compelled to touch it! 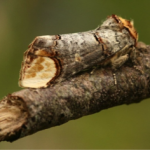 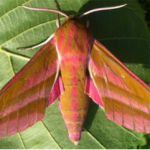 Students enjoyed a second happy outcome of National Moth Night as our eggs and incubator had arrived the previous day providing a wonderful opportunity for our committed  ‘wildlifers’ to discover all about the chicken life cycle and development. Why should infants get all the fun? We obtained fertilised eggs from a farm up the Avon Valley. Hatching occurred two weeks later on July 4th and 5th and several groups of students were able to capture the happy moment (see below!) 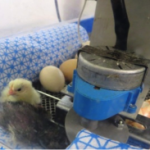 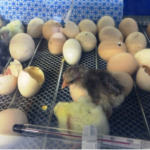 As the science labs are suddenly being shut down for rewiring and their contents completely empitied, the chicks will be raised on a free range farm in Fordingbridge. 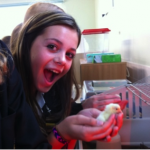 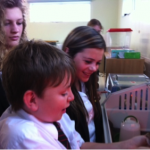 This year’s Big Butterfly Count runs from 14th July to 5th August. We intended do the count on many occasions but it didn’t stop raining. Eventually we managed a 15 minute session but there were NO butterflies at all, suggesting our poor summer has already had a bad effect on butterflies. In the last week of term, we spotted a few – cabbage white, red admiral and gatekeeper.  We have provided everyone with details of the Butterfly Count website: and hope students will have the opportunity to count in the lovely weather that marks the first week of the holidays. At the time of writing this, we know nationla counts are well down on last year.

Likewise, we have encouraged students to take part in the Flying Ants Survey in the first week of the holiday. Flying ants often appear on exactly the same day in different places in the UK, but sometimes they come out over a period of days or even weeks. The Society of Biology has asked for people’s help to study whether flying ants appear at the same time in different parts of the UK, and to investigate what weather conditions encourage ants to fly.

Our final ‘animal’ project is truly an animal/environment hybrid, and is one that has yielded very satisfying results in every respect. It is another activity suggested by Roots and Shoots as a ‘Dust Bowl’ activity. This is the background to our personal story.

Students know we have destroyed more wild flower meadows than any other habitat in the last hundred years. They have been converted to arable or built upon, or sprayed and re-sown with more productive grasses. Surviving meadows are now very fragmented and often degraded. Loss of beauty and richness of our countryside is itself bad, but it’s catastrophic for our native pollinators that rely on these plants for habitats and food. It’s not surprising that our pollinator numbers have gone into abysmal declines. We’ve already lost 23 bee species in England since 1800 – including 3 bumblebees. Trends continue downwards and as they do so, as being a biodiversity disaster, our food may look very different as most of our fruit and vegetables are insect pollinated. An amazing 80% of species rely on insect pollination.

It was important for us to find room for a few nectar-rich native wild flowers. One way of doing so is by making the type of mini meadow our ‘Bee Cause’ group created. Hearing about the decline of pollinators from many sources, including Roots and Shoots, and led by our sixth form students, a ‘Bee Friendly’ group formed. They launched a campaign that involved a presentation to students in all years and it was this that brought new students on board.

After researching reasons for the decline of pollinators, and bees in particular (see Rosie’s sign for a summary), we cleared a narrow strip of ground on the edge of the school car park, a heavily used and highly visible plot. It was sown with a mix of cornfield annuals in March. The wettest spring on record meant that nothing germinated so students repeated their sowing with ten packs of Friends of the Earth ‘Bee Cause’ seeds. By now the ‘Bee Cause’ was well known and the ‘Bee friendly’ group wore distinctive badges. They had, of course, all signed up to the Bee Cause and obtained seeds for their own garden areas. A small weed patch eventually appeared so Rosie created a sign to show something would happen! 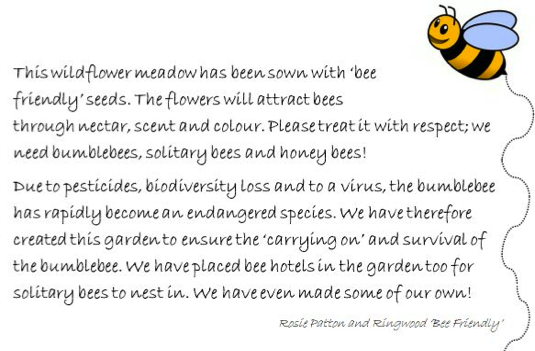 Our lovely sixth form leaders left school giving the ‘Bee Friendly’ a beautiful bee lodge, spurring youngsters into further action. Hollow stems were collected and students made several nests for bumble bees had visited as had honey bees and solitary bees. We are optimistic that solitary bees will use their nests. However, we were still limited by the weather – it rained and rained! The photo shows a very wet bee lodge created by students amongst luxuriant growth that appeared before flowers emerged.

By late May the first poppies emerged, followed by corn marigold, corncockle, cornflower and corn camomile. These were our cornfield annuals. Our mini meadow began to look amazing. By June, other wild flower combinations appeared, musk mallow, yarrow, scabious, betony and wild carrot, for instance.  The biodiversity by late July was superb and the meadow has attracted a range of pollinators as the project intended. 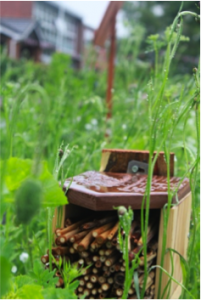 In our final week of term, warmer weather let us carry out some serious survey work on our mini meadow, although sadly not for butterflies, as described above.  Several species of bumblebee visited the plot, as did many honeybees, solitary bees and honeybees. Results indicated that the corn poppy was the preferred flower in June but throughout July, the cornflower was more often visited. As new species flowered so it became harder to decide which, if any, were a bee’s flower of choice. The plot has been beautiful, making a bold statement about conservation and habitat loss in the middle of a car park. Furthermore, our primary objective has been achieved – we appear to have increased the number of pollinators on the school site.

BELOW: Late July and our wildlife meadow and bee garden is stunning. It has entranced students, staff and visitors for the past five weeks. 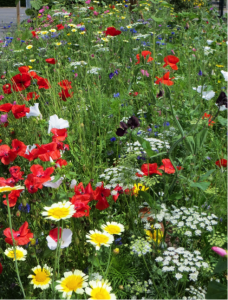 Below: success! One of many photos we’ve managed to take of honeybees on cornflowers. 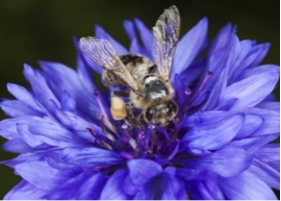 The next photos show our mini meadow five weeks after appearance of the first flowers: wild carrot, betony, nigella and musk mallow are flowering, and by late July, musk mallow was dominant. 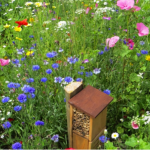 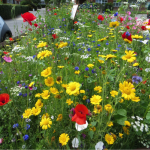 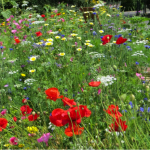 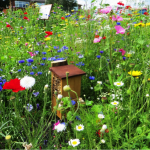 In the final ten days of term, comfrey, wild carrot, lupin, viper’s bugloss and rock rose appeared and with this increase in plant (and invertebrate) diversity, the garden became a good teaching resource. Students saw first-hand what ‘biodiversity’ meant and many classes carried out ‘pollinator’ surveys descibed earlier, recording which pollinators visited which flowers. Sixth formers spotted different species of bee and were able to carry out more specific identification. Their results were interesting and well photographed but are probably beyond the scope of this article.