There have been many whole-school ‘people’ projects, such as support for a school in the Gambia, and there is huge overlap with projects described earlier, but here some more specific Roots & Shoots initiatives of the summer term are described.

Our Jubilee Lunch, served to staff and visitors, was a celebration of the very best of local food, from trout from the River Avon, to venison in Ringwood ale, crab with sea samphire from the coast, local strawberries, Ringwood eggs in meringues and very much more! The raspberry and blueberry cake that formed the centrepiece was created by Roots and Shoots students, Katy and Sam, The meal, served the day before the Queen’s Jubilee weekend, was prepared by Roots and Shoots gardening students working in a great unique collaboration with eight Year 10 home economics students. 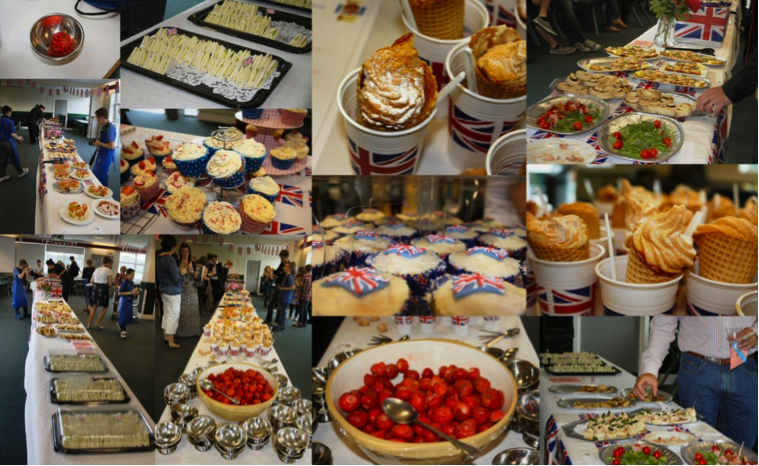 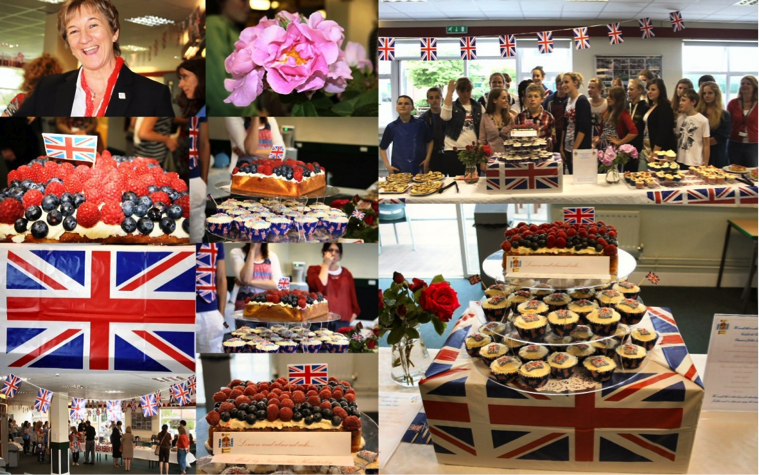 Four of our sixth formers learnt about Colin Firth’s real concerns about global injustice and Fairtrade. It therefore came as no surprise to hear that he was launching an appeal for the Awa, the most endangered tribe on earth. One hundred individuals have never seen the outside workd. This group of Indians live in the remotest regions of the Amazon Basin, living a simple, subsistence lifestyle.  Their forest is being illegally cut for timber, and cleared by burning. According to Colin Firth, when the loggers see the Awa, they kill them. The Awa’s bows and arrows are no match for guns.

The girls formed a student action group to highlight the desperate plight of the Awa. A short presentation was shown in all tutor groups and students urged everyone to watch Survival International’s film which shows the Awa in their natural rainforest environment – before the loggers move in. Colin Firth’s impassioned call to action comes towards the end of the short film. Finally, there is an opprtunity to write to Brazil’s Justice Minister. A template email was provided, but as these emails were being automically blocked, it was suggested that people use the option of posting a pdf copy of the letter.

‘People and Planet’ gave an excellent presentation of the ongoing problems associated with climate change. We decided that role play and debate about the ongoing environmental, economic and social problems of the Niger delta was the best means of following this through.  Thus, after watching a short video clip, students took on various stakeholder roles – as representatives of Shell, the UN, the Nigerian government and indigenous peoples they argued and debated the issue.

The Languages department followed this session up by asking provocative questions such as, “Do you care if our use of resources is sustainable or not?” “Do you care about global poverty?” “Do you know what you should about Fairtrade?”   “Are you pleased that Africa’s hotting up, or do you regard it with fear and trepidation?” “Shouldn’t somebody stand up for these issues and be counted?  This was an attempt to make students incandescent with rage and global inequality and it resulted in a noisy protest in Ringwood about people’s disregard for the human rights in a changing environment. Of course, students were challenged because the protest was in French and in Spanish.

TOOLS FOR SELF RELIANCE

Tools for Self Reliance work with local organisations in some of the poorest countries in Africa, such Tanzania and Uganda. They are based outside Totton, and now have a branch in Ringwood where a few students volunteer at weekends. Thanks to Alan Busher, a volunteer himself at ‘Tools’, twenty students were able to refurbish tools in the technology workshop at school. They packed two carpentry kits for Sierra Leone and included a letter explaining who they were and what they’d done. We wait to hear news of the progress of our boxes!

We continue to support Fairtrade wherever possible, for instance in Fairtrade cooking,

Mrs Stewart has prepared menus that are entirely sourced by Fairtrade ingredients and early in the summer term, on World Fairtrade Day, we held a Fairtrade breakfast – a first for Ringwood.

RINGWOOD – A FAIRTRADE TOWN ONCE MORE?

Seven of our keenest Roots & Shoots students gave a good presentation on a warm May evening to help launch Ringwood town’s bid to renew its Fairtrade status.  Students were delighted to be given a tour of the brand new Gateway building and enjoyed the excellent faclities, such as a projector that was bright enough to project onto a screen in bright daylight!   Students also mounted a photographic exhibition and a great display of Fairtrade goods. 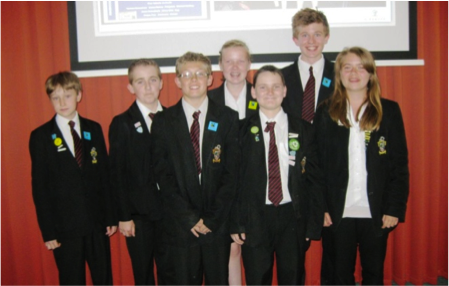 We know that the evening was a success and that the town of Ringwood now has a steering group to take Fairtrade forward.

Ringwood is in the process of renewing its Fairtrade Town status, as described above. A small group of students have now carried out a Fairtrade audit. Which shops stocked Fairtrade items and what did they stock? These students are now creating a leaflet for the town. The work is ongoing and when the town’s Fairtrade status is finally re-established, we hope that this leaflet will go into outlets in the town. We are very grateful to the Co-operative for sponsoring printing costs.

A large proportion of the world’s sports balls are made in Pakistan, often in very poor conditions indeed, and sometimes in sweatshops. After watching video clips of children working in very poor conditions, students discussed Fair Play and showed how the manufacture of footballs, basketballs and volleyballs can be done ethically. They made footballs ‘African style’ from plastic bags and elastic bands and then enjoyed games of basketball and volleyball played with ethically sourced Fairtrade balls.

The great news is that we met two schools at the Hampshire Fairtrade Schools’ conference, held at Basingstoke on the final Saturday of the school term, who have taken up the challenge of a game next term!

Mauritius is a well-known tropical paradise but parts of it are extremely poor. Koolskools provide Fairtrade cotton polos that are currently being bought by Year 6 parents for use in Year 7. He can vouch for every stage in the supply chain. Koolskools work with people in Mauritius who are setting up an orphanage and told students a little about the project and about the problems in the cotton industry, both environmental and socio-economic. Students created friendship bracelets and are working on a booklet to share with the children in Mauritius. 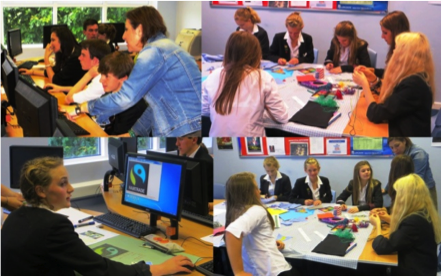 Our final Fairtrade event of the year was WEAR FAIR, our Fairtrade fashion show. In a great celebration of Fairtrade, our keenest Fairtraders (and staff) who were brave enough to model, pounded the catwalk. We were supported by the Co-operative who supplied Fairtrade wine and nibbles!  Timber in Ringwood supplied clothes, as did the town’s charity shops. Our labels included Nomads and Bishopston, Traidcraft, People Tree and Koolskools. Students were really grateful to these companies for lending clothes in a harsh economic climate. We learnt at the Hampshire Fairtrade Conference that Fairtrade firms are finding these times tough.  Photos below were taken by Eco Champion and Warrior, Leon, Year 8. 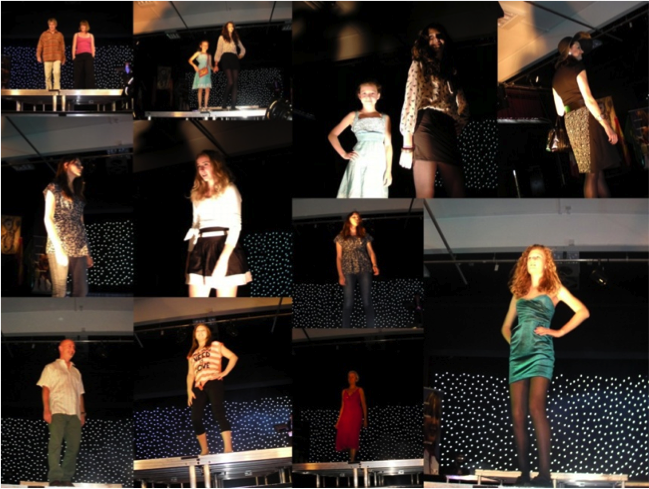 We were pleased to support one student’s fundraising efforts for the Philippine Community Fund. This group helps communities who try to support themselves through initiatives such as recycling projects in the Philippines, and Evie set up a stall to sell some of their beautiful recycled products such as jewellery. She gave a short presentation of PCR’s work and many students were shocked by the dreadful conditions in which children live so they decided to give our retiring collection to this worthy charity. Since we were lucky enough to obtain sponsorship from the Co-operative for the event, it meant that all profits could go to support PCR. 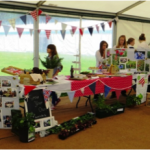 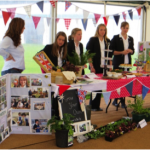 When asked to set up a display at the New Forest Show, students showed the various (excellent) outcomes of our visit to The Pig at Brockenhurst. Photos show Katy, Sam, Ellie and Mollie setting up the display in the showground at the end of term. Each received a medal and a certificate, and returned to the show on July 25th, when the Queen was in attendance. We had to pick some final vegetables and collect a few flowers from our mini wildflower meadow after we broke up to replenish the display. Our mini wildflower meadow had almost turned pink and white! This photo of a mallow in the meadow was taken by Katie Laurilla. 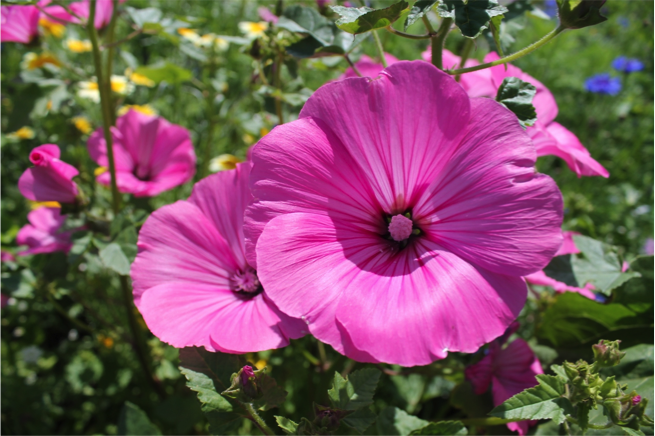 Students were thrilled to be given ‘front row’ wrist bands, and Katy managed to speak a few words to the Queen. A truly exciting end to an action-packed term! 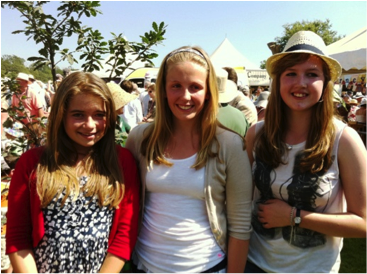 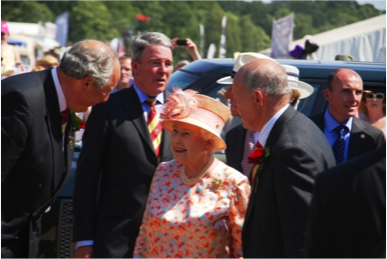