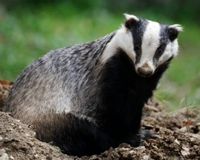 Sign up to this petition to prevent the cruel and unnecessary killing of thousands of badges.

Plans to kill badgers, in a misguided attempt to eradicate bovine tuberculosis (bTB) in cattle, could begin in England very soon.

At least seven out of every ten badgers will be shot across two areas, each approximately the size of the Isle of Wight, over a six-week period. If the full policy is rolled out it could affect up to forty similar sized areas across England and result in the deaths of up to 130,000 badgers.

The scale of the killing could lead to the disappearance of badgers from many local areas. Badger numbers across England could be reduced by a third, and across the southwest by around 50 per cent.

Many thousands of badgers could be injured and left to suffer a slow and painful death.

2 thoughts on “Please join us and tell Prime Minister David Cameron: Killing badgers is not the solution. Listen to the science and Kill the Cull, Not the Badgers”