This year has been a great year for UCL Roots & Shoots. First of all, we got together and rebooted our lesson plan to cover the most current topics and really focused on having a lot of solid research behind all of our subjects. We then managed to teach 8 lessons in two different schools in Camden (Argyle and St. Aiden’s Primary School), all to years 5 and 6 with two sessions per class.

Our lessons this year involved a variety of interactive ways for the kids to get involved about current issues related to the environment, conservation, and humanitarianism. For example, in our first lesson, the kids were asked to draw in red pen on a picture of a house all the things that they think use electricity. Then they were taught about the difference between “brown” and “green” electricity and why it’s important to save energy. They then had the opportunity to draw some examples of green electricity on their houses (including windmills on their roofs and geothermal cores in their gardens!). 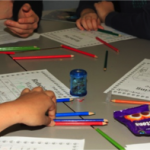 We also covered aspects of deforestation and habitat loss in our first session, explaining the causes and consequences of this issue in small groups with the kids. We introduced them to logos such as FSC and Rainforest Alliance so that they were able to recognise when a product was from a sustainable source. We also added a section about fair trade and explained why it’s important to buy things like chocolate from Fair Trade certified companies. This message sunk in a little better after we gave them some fair trade chocolate to try! 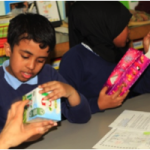 In our second session we introduced the kids to the issues of poaching and the exotic pet trade, something which we felt a lot of children today know very little about. The kids really enjoyed learning about the big five in Africa and how illegal poaching is diminishing their numbers so drastically. We also talked about the massive issue of overfishing, explaining by-catch by having kids cut out pictures of sea creatures and sticking them on a picture of a net to see which ones are caught along with the fish we eat. The kids were really shocked to see how many animals like gulls and turtles are killed with the fishing techniques that are often used. By the end of the session all the children were really excited about getting their parents to only buy line caught fish and never buy anything made from crocodile skin!

We ended our time with each class by asking all the children to write a pledge on a little paper leaf about something they were going to do differently in their own lives to combat the issues we had talked to them about. These ranged from “turn off my x-box when I’m not using it”, to “have a shower instead of a bath”, to “ask my parents to always buy Fair Trade”. These were all stuck on a big  tree to show that even if we all just do one thing we can make a big difference! It was great to see how excited all the kids all were about what they were learning and about the things they could do to help. We all felt like one of the most important things was just for them to see that it’s not just their teachers that care about these issues, it’s young people from universities too. We’re happy to say we got very good feedback from both schools we taught at this year, and can’t wait to get back into teaching more lessons with them and hopefully some new schools too! 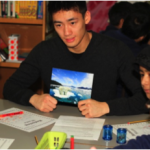