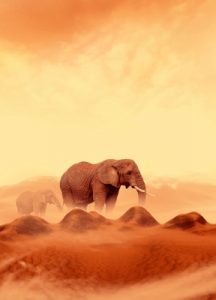 It’s been reported today that elephants in the protected Serengeti national park feel less stressed than those outside the protected area. We spoke a few weeks ago about the illegal trade in ivory (the white bone-like material that elephant tusks are made of), and we know that unfortunately there are people who still buy ivory, so the Serengeti national park in Tanzania was set up in 1951 as a protected area where animals would be safe from poaching (illegal killing). However, there is no fence around the national park and animals can wander in and out as they please.

So how do we know that elephants feel more stressed outside the protected area? Well, somebody had the wonderful job of collecting elephant poo, and this poo was tested for the stress hormone gluccorticoid. Elephants within the protected zone had lower levels than those outside it. The study also found that more elephants lived within the safe zone than outside it.

You could make a lot of this data. Of course more elephants live within the safe zone if more elephants are killed in the zones outside it, but what we here find interesting is that the animals seem to KNOW which is the safe zone and which isn’t. Without looking on a map you’d struggle to know which was the protected area and which wasn’t (I know, I’ve been there), but the elephants know which areas are safe and which aren’t. They know which areas are likely to have poachers and which aren’t, and this says a lot to me about intelligence and consciousness of animals. One argument that I have heard time and time again is that we shouldn’t worry about animal welfare as animals are less evolved to feel pain and suffering than humans. They may be less evolved (I’ll leave that argument to the experts) but that doesn’t mean that they can’t feel anything. We know that animals react to stress, just watch a cat with a mouse and see how the mouse reacts, but in the instance of the cat and the mouse the mouse is staring at the cat, the danger is in its face, it’s real and immediate. What our elephant friends here are reacting to is a danger that is understood but cannot be seen. To understand that two areas which look to all intents and purposes the same, with the same vegetation, the same predators are actually different involves quite a high level of understanding. The elephants have learned to avoid humans, because humans often kill them, they have learned which areas are more likely to have bad humans in them. We can’t argue any more that mammals don’t understand danger and don’t feel upset (we also know that elephants grieve for their dead and display kindness).

My second and final point is that given that the two areas are the same, with the same vegetation and same predators and diseases, therefore most of the dangers that elephants face are the same in the two areas. We know that life for wild animals is pretty dangerous. If we look at it that way, how much damage must the poachers be doing in the unprotected areas to make the elephants feel more stressed?

It’s not a nice thought is it?

I like to leave you with some positive thoughts with my blog posts. As I said above, I’ve been to Tanzania, and I was encouraged by the attitudes of the local people to the animals, I did feel that measures were being taken to protect the wildlife, but of course there is always more to do. So I’ve had a look through the news, and I was pleased to find an announcement made today that the US government will be providing technical support to the Tanzanian government to stop poaching. Sadly, as long as people want to buy ivory there will be poaching, but every small step that makes it harder to kill elephants, and that brings those who do it to justice is OK with us.