In July 2012 Turners Hill School were lucky enough to win £1000 in the Green School Awards. We have already implemented many green initiatives in school and decided that we would like to spread the eco message further afield, internationally!

We decided that we would like to spend the money on a laptop and solar panel which could be donated to a primary school in Africa.

Our local secondary school makes an annual visit to Tanzania and they kindly agreed to help us with our project.

We purchased the laptop and loaded it with some software and did the necessary wiring to a solar panel.

In October 2012 the secondary school students left for Tanzania with our donation. As yet we had no idea which primary school would be the benefactor.

Once in Tanzania and after some discussion, it was decided that Chanzige A primary school would be a suitable candidate and the equipment was duly delivered. As well as the solar panel, small solar buggies were provided to help the Tanzanian children understand how the solar panel would work.

Chanzige A is in the Eastern part of Tanzania, about twenty five kilometres from Dar es Salaam. It is a government aided school with 484 students and 26 teachers. The school has no electricity and as you would expect very limited resources generally. Chanzige A explained that although they have a good record academically and with sport they have been doing little to address issues involving the environment. They were delighted with our donation and very keen to raise awareness regarding this subject. 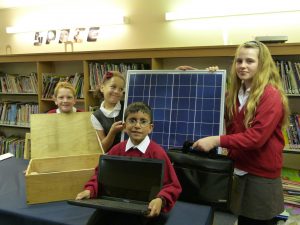 The school, very quickly, had the solar panel installed, this gave them sufficient power for four lights and to keep the laptop charged. This was the first lighting they had in the school, they were thrilled, especially to have some light in their library area. 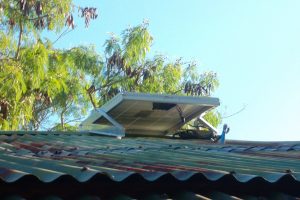 Chanzige A was very keen to find out more about what we do at our school to raise awareness about the environment. We explained that we have a ‘Green Week’ every term, focusing on different areas. They were very quick to do the same! Every child at Chanzige A was asked to bring in a gardening tool and some were able to provide small trees and flowers. They planted some trees for shade, some Mango Trees and each classroom got a flower border.

The link with this school was becoming so successful that we decided we wanted to extend it by sponsoring one of the teachers from the school to visit. We approached Total who donated £500 and we did some fundraising within school.

In March 2013 George Lameck arrived in the UK! As well as visiting London, Brighton and some other places of interest, George took assemblies and spent time in our classrooms. He was able to explain to our children how different the schools in Tanzania are and was able to help the children reflect on their own good fortune. 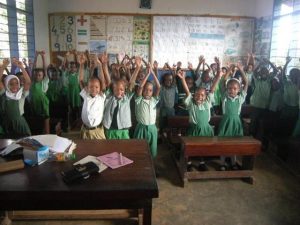 We were able to send George back to Chanzige A with a second solar panel and a second hand laptop. We continue to communicate regularly with them and hope that this link will be long lasting and beneficial, environmentally, educationally and culturally for many years to come.