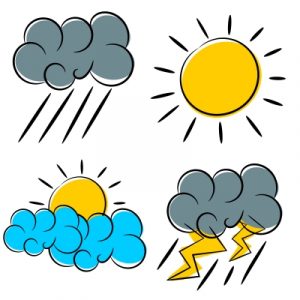 This week, 20 top scientists are going to meet to discuss the crazy weather that the UK has been having for the past few years. In particular they are going to focus on the cold winter of 2010-2011, the wet summer last year, and this year’s non-existent spring.  Discussions will focus around whether this is a result of changes in the jet stream (the air that circles the earth just below the Arctic), something else to do with anthropogenic (i.e. caused by humans) climate change, or just natural variation.

It seems good to get the discussion rolling, and we’re keen to see what comes out of the meeting but what worries us a bit is that proving that any individual bit of weather is due to anthropogenic climate change is very very hard.  Climate is by definition the patterns of weather that happen in a given location, so proving that that weather is part of a bigger trend BEFORE that trend has had time to happen is hard. That’s the problem with working in climate change science. The overwhelming majority of climate scientists agree that anthropogenic climate change is happening, but it is incredibly complex and we need more data over a longer time period before we can start making accurate predictions about how this will affect the weather that people see day to day. Without such predictions many people will not believe what the scientists have to say, and without people believing anthropogenic climate change is happening they won’t do anything to stop it.

Another issue is that there are many people who do not want governments investing in green technologies and do not want people to change their habits as they make money from these habits. Often, when scientists talk they make what they say too complicated for people to understand (because the truth of climate change is massively complicated and hard to understand), and when lobby groups and interested parties talk against anthropogenic climate change they make what they say simple. That doesn’t mean that these lobby groups are correct, but unfortunately many people believe them simply because they have understood their message and misunderstood what the scientists have to say.

We don’t know what conclusions the group meeting today will come up with, but our sincere hope is that even if they conclude that they cannot say where the UK’s weird weather patterns are coming from, they can communicate that in a way that doesn’t allow interested parties to misrepresent what they’ve said.

As a final point, I’d like to bring in some wisdom from my father.  When a dinner party turned to a discussion on climate change a few years ago, my father silenced a particularly vocal climate change denier with this statement “even if you believe it isn’t happening, don’t you believe that we have a responsibility to future generations to leave them with enough resources and natural space that they can live? We know that oil is running out, and we know that there is a finite amount of space, so shouldn’t we leave some for them?”.