So schools out (hooray) and the Sun is shining. Good news for the bees, butterflies and other insects who after a late start are now appearing flitting from flower to flower. Sadly and of great concern is a lack of greenfly and the ladybirds which feed on them. Here’s hoping for a late come back.  Last weekend Super Agent D stayed with her sister in the beautiful setting of a nature reserve. Cattle grazed in water meadows where the grass was so high only the tops of their backs could be seen and a myriad of moths and butterflies rose and fell amongst the flowers of the wild flower hay meadow.

Back at the office the team had a surprise arrival in their walled garden. A female duck must have flown in and laid her eggs in the shrubbery. No-one had any idea she was there until she suddenly appeared with twelve little fluffy ducklings! As the duck flies the river is minutes away but as the duck waddles there was the slight problem of a busy High Street. A decision was made to foster until the little ones are big enough to fly. They are all thriving on natural foraging with duck food, a bright pink paddling pool and their favourite a cat litter tray filled with water! 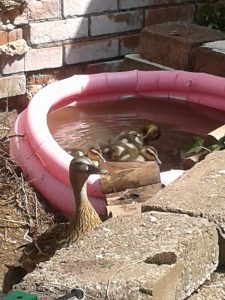 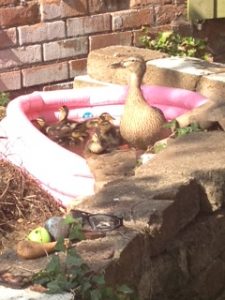 At the other extreme Agent D was at another office last week in a busy and very hot car park. As a 4 x 4 left Agent D noticed something most unusual – a tortoise in the blazing Sun in the car park! The tortoise was rescued and another agent took it home for the night. The next day there was a note through the door re a missing tortoise. It belonged to an old lady who had had the tortoise for over 50 years. We reunited them the same day. 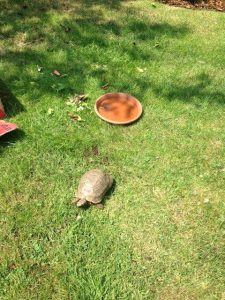 Up in the Thames Valley Region our Super Agents have been working on a Communal Garden Project where flowers and vegetables will be grown as well as different little projects for wildlife and outdoor learning. A lovely way of people from all across a community to work together to create a functional and productive area which also benefits the local wildlife and their local environment.

Back here in Devon Agent D decided it was time to tidy her jungle of a garden a bit but then discovered several very good reasons why not to :

–       Going to cut back a natural hedge Agent D discovered spiders nurseries full of tiny spiders not quite ready for the wider world.

–       Noticing her overfill pipe was dripping Agent D was going to sort it out until she saw all the sparrows taking a shower in the bush underneath!

–       Cutting back some dead wood Agent D rediscovered her logan berry bush. She released it and picked some of the logan berries but left some. It was not long before the unique ‘chuckling’ sound of a blackbird as she fed on them could be heard.

–       Going to tidy up some planters a micro world of millipedes, centipedes and others was revealed as they sheltered from the heat of the Sun in the dark damp safeness under the pots. The planters stayed where they were!

Agent D decided that the garden is fine just as it is. It provides shelter, food and a whole range of habitats for birds, slow worms, frogs, toads, butteflies and moths, stag beetles, glow worms, a hedgehog and visitors such as the bats that whizz around at night.

Agent D gets very sad at the rural and urban deserts that are created as people clear their gardens to replace them with gravel and decking that might look smart to some but offer little food or protection to our wildlife.

This Summer Agent D and her friends are doing many activities including Rock Pool Safari’s, Beach Combing (with litter picking),

Woodland Walks and Story Telling. All the Agents continue to care for others and the world around them, all doing little things that make a difference.