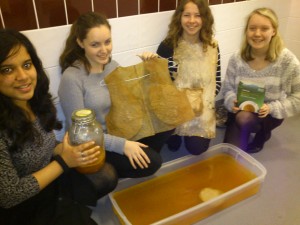 Each term we highlight the work on a particular school whose project has been extremely innovative.  This term we would like to tell you about Queen Elizabeth II High School’s grow your own clothes scheme.  In the West, purchase of cheap clothes from overseas has a negative impact on both the environment and workers in those countries where they are produced, so we were pleased to see a project that showed young people making their own clothes, without the significant environmental and human costs.

The idea came about after reading an article on the BBC news website, and we love how these students and their teacher dived right in. The clothes were grown in a “vat of liquid” using very simple household ingredients such as tea and sugar along with a bought starter culture. We were fascinated by the “vegetable leather” that the group created, which could be cut and sown like the real thing or moulded when wet to produce the desired item. So far the group has made 3 garments using their eco-friendly mix, a waistcoat, an apron and a skirt, and were invited to take part in the “Manx Wearable Art Show” earlier this year. 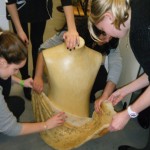 Old clothes can cause terrible problems environmentally, filling landfill sites and creating pollution,  and especially given that so many environmental resources go into creating textiles for clothes in the first place (just think how much water you need to grow cotton). Our current trend for fleeting fashions and “disposable” clothes adds up to a big environmental problem. So another thing that caught our eye about this project is that the clothes are biodegradable, meaning that once they have been used and are ready to be disposed of, they won’t be clogging up landfills for decades to come.

Along with the homegrown clothing project, in 2011 some of the younger students in the school worked on finding uses for old paper by making paper fuel briquettes for the elderly to be distributed that winter.  For us here at Roots & Shoots this is a fantastic example of seeing a need within your community and creating a practical solution, using recycled products. Along with paper briquettes, students made paper plant pots (for growing their own vegetables), paper recycling boxes and seed paper.

The school also won the prestigious Observer Green Champions Award 2013 for the clothes growing project and Most Outstanding School at the Giving Nation Social Action Awards in 2011. The latter award allowed the school to travel to the Gambia for a week to work as investigative journalists on the subjects of climate change and tourism.

Why not pop over to the QEII section on our mission updates page? We are looking forward to further updates from the school.  Well done Queen Elizabeth and keep up the good work.