The leaves are now turning into a myriad of yellows, oranges and reds as nature paints the landscape with the glorious colours of Autumn. A time when people turn to raking leaves, may be have a jump in them or kick them up and many then burn them. Agent Diamond would ask everybody to remember that hedgehogs have a habit of snuggling under leaves and sticks so always check bonfires before lighting them. Even better make a big pile of sticks with leaves for a natural hedgehog hibernating hotel. Not only hedgehogs will seek shelter there but also insects and maybe toads. Our extended warm weather as seen the swallows reluctant to go but they have gathered on the wires and flown. The ladybirds made a welcome come back as the Summer progressed as did the butterflies and bees.

Our agents had a fun summer playing in and exploring their natural world. From amazing rock pools at Paignton teeming with life to wondering at fossils from millions of years ago trapped in huge limestone rocks at Ham Hill to eating wild bilberries and blackberries as we explored the woods at Great Wood. 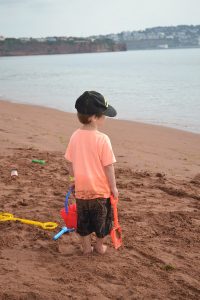 The ducks grew bigger and there came a time when we had to catch them due to work in their garden. Luckily a kindly gentleman offered them a new home high in the Blackdown Hills with des res shed with adjoining pond J Catching them was not easy and was reminiscent of the Keystone Cops! But catch them we did and they settled happily in. 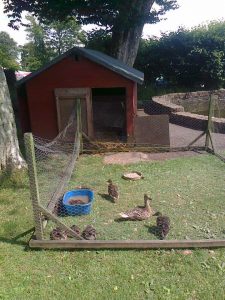 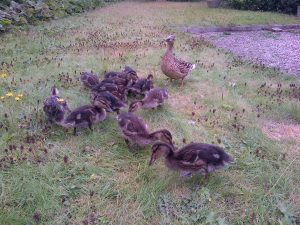 Agent L went on an educational visit to Exmouth where there are lots of rock pools framed by sandstone cliffs. As we got there we were amazed to see the gulls using the roads to crack open the mussels they were picking off the rocks as the tide went out. They collected the mussels then flew up to the seafront road where they dropped them. One clever gull even left his mussel on the speed hump, stepped back as a car drove over it and then calmly went and collected his now opened mussel ! We looked at the sandstone cliffs and Agent L was most surprised to find that the area had once been a hot desert.

We went beach combing along the tide line and the gulls were still busy searching for crabs in the rock pools. As we walked along we were very lucky to see a Peregrine Falcon riding the wind along the cliff edge. Agent L stopped to watch as did many others.

Agent Diamond works for a big company that does a lot of work looking after and supporting young people in lots of different circumstances, not only in this country but abroad as well. To us it is very important that all Young People have a say in their future and so we are actively promoting Young Peoples Forums where they can put forward their ideas and views on all sorts of things that affect them.

Our company also tries to protect the environment so we are careful where our paper comes from and when our offices across the country need restocking it all happens on the same day so that only one lorry is used. Recently Agent Diamond’s office moved and we made sure that we used or recycled everything we could. We took lots of stuff to the local charity shops and made sure everything else was recycled.

Colder weather is forecast now so Agent Diamond has restocked ready to feed the wild birds. Plenty of nuts and seed, not only for the hanging feeders, but for the ground feeders as well. Agent Diamond’s apple tree was covered with apples this year and the birds have had their fair share of them. The blackbirds particularly like them but the thrush also joins them as they peck at the wind falls on the ground.