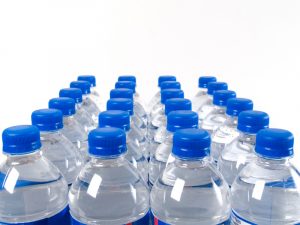 Nine years ago, I wrote an article titled “Is Bottled Water Right for You?” where I pointed out several reasons why the answer to this question is “No”.  I decided to update that article as a reminder to those that read the original one, but also for the benefit of new readers.

Bottled water continues to be one of the fastest growing food products in the U.S.  More than half of all Americans drink bottled water, and about one-third of them drink it on a regular basis.  The sales of this product have more than tripled since 1991, primarily due to clever marketing and more people moving away from carbonated beverages.  The U.S. market for bottled water was almost $12 billion in 2012 and increased another 6.7% this year.  But, should you be drinking bottled water or tap water.

Bottled water is a food product and thus is regulated by the Food and Drug Administration (FDA).  Tap water, on the other hand, is regulated by the Environmental Protection Agency (EPA). In general, the EPA standards for drinking water are more stringent that those of the FDA for bottled water.  For example, city tap water can have no confirmed E. coli or fecal coliform bacteria.  FDA bottled water rules include no such prohibition as a certain small amount of any type of coliform bacteria is allowed.  In addition, water bottling plants must test for coliform bacteria just once a week while big-city tap water must be tested over 100 times per month.

City tap water must meet standards for certain important toxic or cancer-causing chemicals such as phthalate (a chemical that can leach from plastic, including plastic bottles).  The industry persuaded FDA to exempt bottled water from regulations regarding these chemicals, obviously because water is sold in plastic bottles.  There are several other gaps in the regulations, favoring tap water, that have been identified in a study by the National Resources Defense Council (www.ndrc.org).  On the other hand, it should also be pointed out that bottled water is missing an important chemical.   Children that drink too much bottled water would be deprived of the fluorine, typically introduced to tap water but not in bottled water, which helps reduce tooth cavities.  In California, there had been an increase in children’s tooth decay attributed primarily to the increase in bottled water consumption.

For many of the people that prefer bottled water, the primary reason is because of taste.  For those that live in smaller towns and rely on sources other than treated water from large lakes, they may have justification.  However, people who live in or near large cities like Chicago, better taste is not really a valid reason.  Several years ago, a blind taste test was conducted by the Environmental Law & Policy Center at a Chicago restaurant known for its wine tastings.  The attendees tasted Evian, Acqua Panna, Dasani, Aquafina and Chicago tap water all from unmarked pitchers. To the dismay of more than 50 tasters in the survey, Chicago tap water came in first and beat out even the most expensive waters.  Acqua Panna, which has its source in the mountains of Tuscany came in second, and Evian, bottled from a source in the French Alps, came in fourth.  Tap water in New York is of similar quality as Chicago tap water.

Another reason given for drinking bottled water is convenience.  That is a very valid reason, but one must consider the cost of this convenience.  The most recent cost of water was found at Costco for Nestle Pure Life Purified Water which cost about $5.00 for a case of 24 bottles of 16.9 ounces.  This amounts to $1.58 per gallon or $1,580 per 1,000 gallons.  The price of Chicago tap water is increasing and will be $3.82 per 1000 gallons by 2015, but that will still make bottled water over 400 times more expensive.  The best of all worlds is to fill a bottle with tap water; then you have the convenience, low cost, better taste and possibly more pure.  Just make sure you don’t leave the water in the plastic bottle for a long time.

Once again, clever marketing by big industry has swayed the American public.

And there is another problem with bottled water – that source and disposal of the plastic bottle – another major environmental issue.