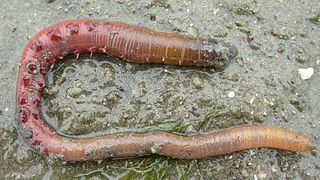 Tiny bits of plastic that are swallowed by worms in the sea may be causing massive ecological damage. But hold on, lugworms aren’t cute, and they’re just a gross worm, why should I care?

An estimated 150 million tonnes of plastic gets lost from the “waste stream” per year, i.e. somewhere between your bin and the landfill site, or down your drain. An awful lot of rubbish gets lost as tiny splinters – “microplastics” are any bit of plastic below 5mm in diameter, and are not caught by the usual plastic disposal methods. Another source of microplastics is washing of synthetic clothes.  Of course this plastic dust must end up somewhere and often that place is in the sea, where it can end up is being eaten by our friends the lugworm. The lugworm then ingest pollutants and additive chemicals along with these tiny (smaller than 1mm) bits of plastic dust and these chemicals can stop the lugworms from being able to eat as much as they need,  or it causes them thermal stress (some enzymes may stop working which means that the animals can’t regulate their temperature properly).

Again, this doesn’t sound like such a big deal, except that lugworms are vitally important to the ecosystem of the sea because lugworms eat sediments.  Yep you read that right, they eat the sand on the ocean floor. Well that’s almost right, they sift the silt and take out the organic matter, meaning that they stop the build up of silts and debris.  Lugworms are often known as nature’s engineers because they generally clear up the mess that other plants and animals leave behind, so if they’re poisoned and can’t eat so much, then no one is doing the tidying up.  Let’s also not forget that lugworms, like all other animals, have their place in the food chain, and if they are being poisoned by chemicals, then so is whatever eats them (and whatever eats them, and so on).  Along with that, if lugworms are being affected, then it’s reasonable to suspect that other animals that feed in similar ways (some types of crab, sea cucumbers etc) are also being affected.

So what does this mean? Well, people have often assumed that these micro particles of plastic are safe and so haven’t done anything about them. Or just not considered them.  This is proof that this approach is wrong and that the problem needs dealing with. Everything that we ever use and throw away has an effect on the planet. But in the meantime, don’t forget to look after the earthworms in your garden (oh, and that thing that people tell you about earthworms growing into 2 when they’re cut in half? It’s wrong.) – if nothing else, recent research shows that they stop slugs from eating your plants.