The Wildlife Conservation Society and Esri jointly developed and produced an online Story Map to tell the story of the elephant poaching crisis. 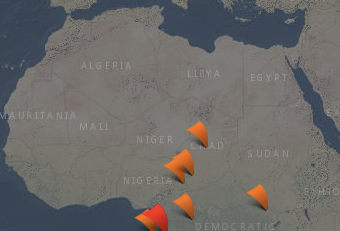 Why now? The release coincides with the U.S. Fish and Wildlife Service’s ivory crush event tomorrow in Denver, CO. The crush refers to the destruction of six tons of illegal elephant ivory. There’s a Fish and Wildlife Service Q&A on the event in this PDF and here’s coverage from the Verge. The event was planned for the first week in October but was cancelled during the goverment shutdown. And, now it’s back!

Esri describes the map this way in a media alert (a release sent to the media, not typically for publication as a press release might be, though some do publish it as is):

The story map gives a broad overview of historic and current African elephant ranges, the collapse of forest and savannah elephant populations, and the ivory trade within Africa and extending to Asia and Chinese demand for ivory.  It tells the story of an elephant collared by Save the Elephants named Khadijah that was eventually killed for her ivory as well as the story of the elephant massacre at Dzanga Bai in the Central African Republic. Also included in the story map is an interactive map that highlights recent poaching incidents across Africa with links to additional details about each story.  The page will be kept current with new points added as news emerges regarding more poaching incidents and conservation successes. …

To end the elephant poaching crisis, WCS advocates a three-pronged approach:  stop the killing, stop the trafficking, stop the demand. African elephants are being lost at an unprecedented rate and the demand for ivory shows no decline. Approximately 35,000 elephants were killed by poachers last year – some 96 elephants each day. WCS recently launched 96 Elephants, a public outreach campaign aiming to bolster elephant protection and educate the public about ivory trade and consumption. WCS is also part of a Clinton Global Initiative commitment to end the elephant poaching crisis. More information may be found at 96elephants.org.

So how is this map different all the other timely, detailed story maps Esri offers? It offers an answer to the last of the four geographic questions. They are:

That last one is perhaps the most important since it prompts contemplation of action. Expanded that question might read: “What should we do about it?” This story map, unlike any other I’ve seen, has a starting point for an answer in its last panel:

How You Can Make a Difference

The fate of elephants hangs in the balance. The crisis has catalyzed an urgent effort by dozens of organizations and national governments to pursue a threefold strategy: Stop the killing. Stop the trafficking. Stop the demand.

You can make a difference. Donate here to support the Wildlife Conservation Society’s work with many partners to stem the crisis.

On the map is a selection of non-profit organizations that are working actively across Africa to save wild elephants. Tap the symbols to learn more and to visit their websites.