The recently launched girl’s project is focussed on improving the attainment of girls at Cheney. The aim of the work that is underway is to bridge the gap in achievement between boys and girls by motivating female students and support them to overcome the barriers they are currently facing, such as reduced self esteem and lack of confidence contributing in lessons.

As part of the project we have carried out staff and student panels to better understand the issues related to girls achievement, particularly the attitude of boys to girls in and out of the classroom. From these we have identified opportunities for staff development to increase awareness of dealing with the issues raised by the students. We have also carried out various assemblies, such as the inspirational assembly with Professor Irene Tracy of Nuffield Department of Clinical Neurosciences, in order to raise the profile of motivated and successful women in our community. Irene did an outstanding job of making the year 11 girls aware of the importance of self discipline and seizing opportunities in life.  We will be extending our work to include further events to involve women in our community whom we have been inspired by, and inviting them into Cheney in order to work with our female students.

During the assembly, the mentor scheme was launched and this has had a great response by year 11 girls, who will receive one on one support in the lead up to their important exams. This scheme will then continue on in subsequent years to allow mentees to become mentors, with the support of staff, in order to create a network of women supporting women. It was interesting to hear that the same mentoring structure functions within industry, as highlighted by Irene in her speech, where networks of women support each other whilst progressing in careers, no matter what level they are at. Networking and mutual support is something traditionally women have not been strong in achieving, and we hope the mentoring scheme will create a solid basis for inter-pupil support within the girls at Cheney.

The girl’s project has been an exciting one to get involved with and the enthusiasm and attention the year 11 girls have provided us has been invaluable in shaping the future of the scheme. We wish them all luck in their exams, and thank them for their contributions in shaping this project. 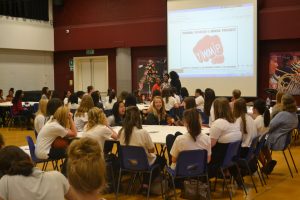 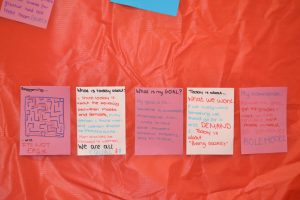 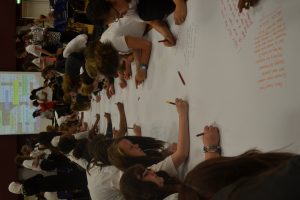 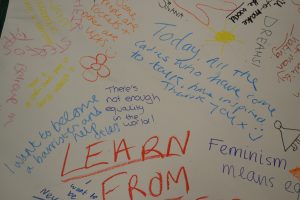 All year 10 girls were invited to participate in a daylong conference aimed to inspire and motivate and to discuss issues that female students face. We invited a range of inspirational female members of our community to participate to demonstrate to our students the spectrum of opportunities available to them and to highlight the progression of women in the workplace.

Sister Frances Dominica of Helen and Douglas House opened the day with her moving speech about her life and work. Many of the girls commented on what an excellent role model she was and how they enjoyed learning about her varied and interesting experiences. The students then went in to “break-out groups” which were designed to facilitate small group discussion and personalised activities. The themes of the sessions ranged from tackling personal confidence and self esteem issues, raising and sharing aspirations, understanding the differences between boys and girls, mindfulness to exploring feminism.

Emmy Tulane-Cassia then introduced a blog by a London school girl whichaims to promote feminism in schools. The students worked together to complete the sentence “feminism belongs in schools because” and produced some really eloquent and thought provoking statements. The girls appeared so enthusiastic to participate and to support this movement. The energy felt in the room after Emmy’s powerful speech was tangible and so many girls left for break really understanding what feminism is truly about.

The girls then attended more break-out groups before Caro Howell of the Foundling Museum spoke before lunch. Caro gave such an important message to the girls, which is easy to escape nowadays, about persistence and resilience. She shared the concept of thinking to yourself “what would you do if you weren’t afraid” which is a valuable tool that I really hope our girls will put into practice.

After lunch Ithar Mohammed, an ex-Cheney year 11, opened the reflection activities with an introduction into the young Women’s music project and a short musical performance that really seemed to enchant the girls. They then took to the floor, which has been covered in a massive roll of paper, to share their thoughts and feelings on the day. What was produced spoke for itself, with many girls sharing feelings of happiness, confidence and self worth. There were so many positive comments about the inspirational speakers from the day and thanks for the time to spend reflecting and working on some of issues that female students face at Cheney School.

I closed the day with a short speech, which included an introduction to the mentoring system that the girls can choose to be involved in next year. I was bursting with pride at the level of participation and achievements of the girls throughout the day and cannot praise them highly enough for their strength and maturity in tackling some difficult and sometimes forgotten topics. I left the Women’s Conference with massively high spirits and a drive to do my very best – I hope it did the same for our girls.