Torn from their mothers, young monkeys have needles inserted into their eyelids before being flown to UK laboratories.

These shocking pictures show frightened monkeys being held down, tattooed without anesthetic, injected and examined as they await a flight to the UK to be used in scientific research. 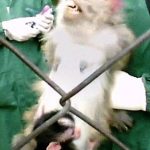 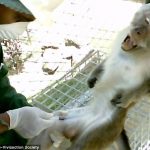 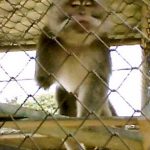 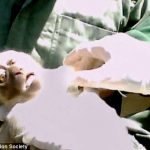 These photos were released by the National Anti-Vivisection Society (NAVS), who recently released findings from a probe into one of several Mauritian farms breeding long-tailed macaques for experiments.

They witnessed the stressful separation of mothers and their babies and rough handling, including monkeys wrenched from cages by their tails and netted animals slammed onto concrete floors.

Monkey experiments increased by 50 per cent last year. In 2012, more than 1,500 monkeys were imported into the UK for experiments, and nearly 1,000 of those were from Mauritius.

The Home Office recently admitted to NAVS that it no longer checks and approves overseas breeding facilities, instead leaving it up to laboratories, according to the organisation.

In the UK, monkeys are used mainly to test drugs or for neurological (brain) research, but other tests are available that can be used instead.

NAVS said it has found monkeys in labs that have suffered from rectal prolapse from the stress of being restrained, blackened lungs, trembling, collapse, bleeding and self-mutilation – including one animal who chewed its finger to the bone.

Most monkeys are killed at the end of the experiment, but others are forced to endure years in barren laboratory cages.

How can we help?

Get involved in the campaign by tweeting and posting via Facebook pictures of you (and your class) with ‘NON!’ written across the palm of your hand to urge Air France to stop its monkey business. Air France is the last major passenger airline that continues to have a hand in the cruel monkey trade.

Please send a donation today – securing footage inside secret facilities like Biodia is difficult and expensive – help us be there for the animals and campaign for an end to the global primate trade.

Visit this website to find out how you can take action. Contact your MP and MEP and urge them to press for an end to the use of primates in research.

Visit this websiteand find out more.

Please help us spread the word and end this suffering.

Thank you for your support!