Not of the biblical boat type but as Acts of Random Kindness which have a similar outcome but on a smaller scale. This has been a busy month for our young people and their foster parents. First ARK was the premature and unsuccessful flight attempt by a young jackdaw. Found squawking indignantly on a stable floor with its concerned parents calling. J our young person immediately told his foster parents. The nest was inaccessible and the young jackdaw was attracting the wrong sort of attention from the resident cat and Jack Russell! A wire dog cage provided a safe temporary ‘nest’ and the young jackdaw was soon enjoying fresh chicken. He was nearly ready to fly and happily rode around on our young peoples arms! His parents remained near-by and I suggested that they put the cage up high so they could come and feed their indignant off -spring. This worked well and a few days later one young jackdaw flew and rejoined his family. 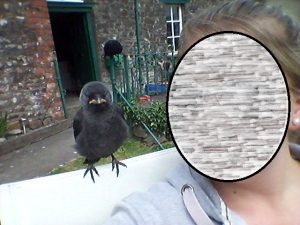 ARK number two was my missed opportunity to find my handsome prince! Driving to work I noticed ‘something’ in the opposite carriageway. A microsecond of ‘Do I ignore it or do I turn round’ saw me turning around. I thought it was a young fledgling but as I pulled up I could see it was a toad sitting regally in the middle of the main road. I quickly scooped him up and he sat indifferently on my front passenger sit as I took him back to my house. I doused him with water and then released him into the jungle that is my back garden. Only later I realised I had forgotten to kiss the toad thus my potential handsome prince was lost to the undergrowth J

ARK number three saw me back at the beach with little Miss ‘I want’ who has changed to Little Miss ‘I care’. The tide being out we were going exploring for crabs. We found a baby crab far from the rock pools in the middle of the sand amidst hungry herring gulls so we carried it over to the thick layers of seaweed amongst the rock pools where it quickly did a sideways scuttle to safety. We then found two jelly fish abandoned by the receding tide on the sand. ‘Little Miss’ had never seen a jelly fish before and was able to gently touch their top and look at their tentacles. We carefully scooped them into our crabbing bucket and walked out onto the rocks so we could release them back into deeper water. ‘Little Miss’ was fascinated and thought they were beautiful. Back to mission ‘crabbing’ we returned to the rock pools. Some other young people were there and one young lady proudly showed us some jellyfish tentacles she had found (sadly the rest had been eaten!) and a random shell she had picked up. Suddenly the random shell started whizzing around her bucket and closer inspection revealed that the shell was a very desirable residence for a hermit crab! We saw many fish, shrimps and a huge green sea anemone…but we did not find any big crabs. ‘Little Miss’s‘

Seaside adventures and interactions with her natural world have bought out her innate caring side. This was beautifully illustrated last week when I used my blue badge so we could stay for longer. She asked why I had a blue badge and I explained that sometimes my legs hurt. Everywhere we went she was checking if I was ok, if my legs were hurting and carrying things that she perceived to be heavy. Of course I reassured her that I was fine but it is heart warming that a young person so emotionally needy in their own right can in turn care for others (human and animal) through little ARK’s.

Returning to my garden it has slightly got out of control! I used to look out of my rear bedroom window down onto the many trees growing. Today I realised I was amongst the tree tops they have grown so much ! But what a beautiful vista to feast my eyes on. An undulating sea of green festooned with the beautiful purple flowers of the buddleias, interspersed with hazelnuts’ and the heavily laden apple trees. Framed around the edges by a waterfall of beech leaves entwined with the wild jasmine and roses that fill the air with their heady scents. A living landscape alive with the fluttering of butterflies, the busyness of buzzing bees and a myriad of other insects. Beautiful in their own right but also essential food sources for the many birds that find shelter and security there. I do get to eat some of the apples but most will be happily pecked at, being a firm favourite of the blackbirds. Similarly the logan berries seldom get picked by me as the birds feast on them as soon as they are ripe. I ensure that there is always water available both for drinking and for bathing for the all – typically of my house the overflow pipe drips but the sparrows are often found in the bushes underneath enjoying their ‘shower’.

I will need to trim the trees but not yet – not until the flowers die back for until then they have an important job to do.