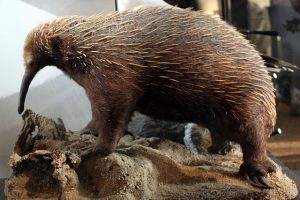 A colleague of mine was in the news last week after discovering a new species of wasp. Whilst that’s quite interesting, it’s not particularly newsworthy, given the vast number of species yet to be discovered (see my previous blog post on taxonomy). What made this newsworthy was that his discovery wasn’t made in the remote rainforests of Borneo or the amazon – but in a school playground in Kent.

I then heard of another exciting discovery, within the Natural History Museum itself. Kristopher Helgen from the Smithsonian Museum was visiting the NHM when he found the preserved skin and skull of a Western long-beaked Echidna. The label said it had been caught in Australia in 1901, except that this Echidna only lives in New Guinea – it was meant to have gone extinct in Australia over 5000 years ago. The specimen had sat at the museum for over 100 years, and no-one had noticed! Conservationists and scientists are now setting out on an expedition to see if it still exists in some remote corner of Australia. This isn’t the first time Dr Helgen has found something new in an unlikely place – he discovered a completely new species of mammal, the Olinguito, in a cabinet in a Chicago museum. Apparently it had been identified and labelled as something else.

So you don’t need to go somewhere wild or distant to make discoveries, and you don’t need to be a world expert either! Last week a National Trust ranger rediscovered an extinct flower. The poisonous corn-cockle (Agrostemma githago) was driven to extinction in the UK by modern farming practices but keen-eyed Dougie Holden spotted one near a lighthouse in Sunderland.

What allowed these discoveries to be made is simple- somebody noticed something odd. Dr Polaszek noticed some tiny, weird-looking insects on a tree, Dr Helgen noticed something was wrong with the labels on those museum specimens and Mr Holden took the time to look at the wildflowers.

So isn’t it worth taking a closer look at the world around you? You never know what you might find!

Image: “Taxidermied Long-beaked echidna ” by Anagoria – Own work. Licensed under CC BY 3.0 via Wikimedia Commons.