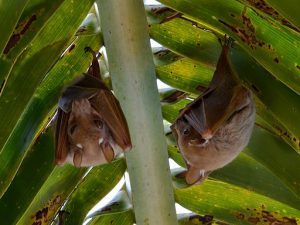 This week Norway announced it was giving $150million in development aid to Liberia, if it ceased deforestation. In the midst of the worst Ebola crisis they have ever seen,  you’d think deforestation was the last thing on Liberian minds, but the current outbreak may have been caused, at least in part, by destruction of the West African country’s forests.

The logic goes like this: Prolonged logging (to sell wood and free up land for planting crops) leads to exceptionally dry and arid conditions (and ultimately, desertification), which in turn influences the number of Ebola infected bats. Human contact with the bats increases, as bats and people are forced together, allowing the disease to cross from bats to humans. So far, this is speculation but it’s not a new idea.  A scientific paper from 1993 reviewed cases of tropical diseases which were directly linked to loss of natural forests. Then in 2006 the United Nations Food and Agriculture Organisation published an article listing a number of “emerging infectious diseases” and possible “emergence mechanisms”. Right there, next to Ebola, is logging, alteration of natural fauna and agriculture.

Conservationists have welcomed the deal, which could save the largest remaining rainforest in West Africa, home to Chimpanzees, forest elephants and leopards. There had been fears that the Ebola outbreak would lead to further logging as the impoverished nation’s economy worsens under the strain.

Deforestation is an issue for us too. In a global market, our appetite for beef (and the soy needed for cattle feed), as well as leather and timber, fuels the crisis. Our planet is complex and the choices man makes can cascade through societies and ecosystems, affecting land, climate, animals and the pathogens which cause disease. Sadly, the people who feel it most are usually the poorest and most vulnerable.