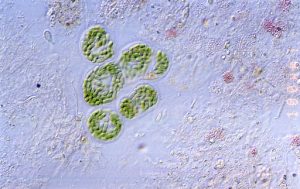 Biodiversity. The great variety of life which keeps our planet working. It gets a lot of attention. Conservationists talk about biodiversity hotspots, biodiversity action plans and the biodiversity crisis. But what gets all the attention are the things we can see. Have you ever considered that there’s a world out there, which we can’t? The world of microbes.

You may not have thought about what a microbe even is but there are millions, possibly billions, of different kinds; yet just 4500 have been fully described. So why should we care? Well, firstly, most life on earth exists because of one group- the cyanobacteria, then there’s all those important ecosystem services they provide. And remember the “Healthy bacteria” in your gut which have been linked to all sorts of health benefits (Or diseases, when it goes wrong).

We know that human activity is changing the world we see, but what is it doing to the world we can’t? Nobody really knows. Dr Anne Jungblut can usually be found scraping up sediment in Antarctica, studying how microbes survive in such a harsh environment. But is now asking about about the harsh environment of our cities. What is microbial diversity like on concrete pavements and glass skyscrapers? How can they survive the temperature extremes, lack of nutrients, and high levels of pollutants? The Microverse project is asking schools to take samples from buildings, for analysis at the Natural History museum in London. Are our cities a disaster for microbial diversity, or are there thriving, species rich communities out there? Who knows? It’s a whole new world we’re entering.