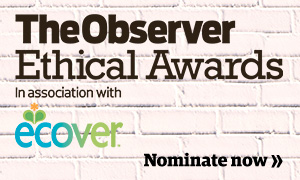 2011’s winner of the Young Green Champions award was Savio Salesian College for their ‘Savy B.O.B Box’, a specially designed roosting box that can function for birds or bats (find out how here). This was a great project and with the help of the award money the project has been expanded and a second generation of the design now also features places for solitary bees and moths to hibernate (see here).

Back in 2012, the winner in the Young Green Champions category was ‘Fact Fashion‘ from the children of Ingleton Middle School. Their innovative clothing features a set of ethical or environmental facts writ large on T-shirts, jeans, skirts and more. Each child chose their own slogan to highlight an issue close to their heart, including ‘every 45 seconds a child dies of malaria’, ‘46,000 pieces of plastic waste can be found in each square mile of ocean’ and ‘every day 6 young people are diagnosed with cancer in the UK’.

2013 saw our very own Queen Elizabeth II High School win the award for their ‘Grow Your Own Clothes’ initiative. They grew a biodegradable “vegetable leather” which could be cut and sown like the real thing or moulded when wet to produce the desired item. This is great for the environment as it cuts down on water use, greenhouse gas emissions due to transport of cheap clothes across the world and non-biodegradable waste.

Thornleigh Salesian College in Bolton took the award in 2014 for their ‘Mama Margaret’s’ craft business which supports women in Dagoretti, one of the poorest slums in Nairobi. Craft items such as friendship bracelets are created in Dagoretti and sold at the school, with the profits ploughed back in to the enterprise. They hope to use the prize money to develop an online sales website for the business, thus supporting more people in Dagoretti.

The 2015 award is yet to be decided. Has your school or youth group got a project like these? Or are you doing something else new and exciting to help people, animals or the environment? You should consider entering this year’s Observer Ethical Awards, and maybe your project could be featured here! Entering is easy and you could win a generous £6,000 bursary from Ecover to further your schemes. Find out more here »