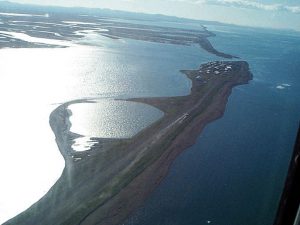 Global warming and climate change are seldom out of the news and we’ve suffered some pretty unusual weather lately. Spare a thought for the residents of Kivalina in Alaska who are experiencing its effects first hand – and the devastating consequences.

The Inupiat people have lived in Alaska for almost 1000 years. Originally nomadic hunter-gatherers, the US government encouraged them to settle in villages over a century ago. Kivalina was built on a thin strip of land on the edge of the Chukchi sea, surrounded by thick sea ice. From here, the villagers could hunt bowhead whales as they had done for hundreds of years- but not anymore. The ice is thinning, making hunting dangerous, and the disappearing ice has left the village open and vulnerable to waves. In fact, soon it will be too dangerous to live here at all.

As the world heats up, less ice forms at the poles. This means less ice to reflect sunlight, and more dark ocean to absorb the light and heat. As the water warms, more sea ice melts, and so on. The arctic is warming at twice the rate of anywhere else in the world, having serious consequences for wildlife and the many human communities that make it their home.

Last year the waves swept right over Kivalina and villagers fear it may soon be swept away. The nearby village of Shishmaref has lost great chunks of land to the sea and its residents have been battling for relocation for years. President Obama proposed allocating $50.4 million to help native American communities affected by climate change. Unfortunately, the estimated cost of moving the 400 Kivalina residents alone is $100 million and there are almost 200 native Alaskan villages under threat from flooding and erosion.

We may not see it in our everyday lives here in the UK (yet) but climate change is affecting coastal peoples all over the world, right now, from the freezing coastal towns of the Arctic to the tropical islands of Fiji and the Maldives.

Think we’ll be safe here in the UK? Take a look at our Floodrisk activity.