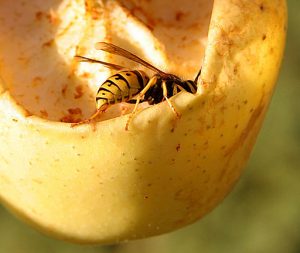 We spend a lot of time on this site talking about the importance of bees and how important they are to our ecosystem. But, as I looked out the window this morning it was not bees I saw buzzing around but a whole different yellow and black striped insect – the wasp. Now, I’m sure you’ve all seen the pictures that do the rounds on Facebook every year that say wasps are evil incarnate and some of you may even have been stung by them (which can really ruin your day) but are they really as bad as their reputation makes out? Do wasps have a point after all? I set about finding out.

The first thing to clarify is exactly what am I talking about when I say ‘wasp’. It turns out there are tens of thousands of species of wasps out there ranging in size from some tiny chalcid wasps that are just 0.2mm in length up to the massive (and terrifying) Asian giant hornet at 5cm in length. The ones I’m talking about in this blog are the yellow and black striped ones we normally see in our gardens in Europe, interrupting our barbecues and helping themselves to our fizzy drinks – the social common wasp, Vespula vulgaris.

The common wasp lives in a nest with a queen, in a manner similar to honeybees. Unlike honeybees, these nests rarely survive the winter, with the queen hibernating and moving on from year to year, so if you have one in your garden the first thing to say is you’ll probably only have to put up with it for a single summer. That’s a relief straight away – we’ve got one one on our balcony right now!

Something that has been puzzling me about the wasps on our balcony is just how little interest they take in us. I always think of wasps as being inordinately interested in humans, following us around in an attempt to get at whatever sugary food and drink we have. It turns out that this is something that only happens later in the year. In spring and early summer the wasps are too busy flying around getting food to feed to the larvae in their nest to bother with humans. The adult wasps collect smaller insects and feed them to the larvae which then secrete as sugary substance to reward the adults. This is where the wasp’s sweet tooth comes from. This also shows us the first ‘point’ of wasps – they are brilliant pest controllers. They mainly prey on insects and insect larvae like caterpillars that would otherwise be munching their way through our gardens and allotments. Aha! They really are useful then! The wasps themselves also provide a food source for animals ranging from other insects to birds and mammals such as badgers and weasels and even humans.

So, what is it that makes wasps such a nuisance in late summer? Well, at this time of year all the larvae in the nest have grown up. The adult wasps, conditioned to enjoy the sugary substance that the larvae secrete in exchange for food, need to look elsewhere for their fix – and your jam sandwich fits the bill perfectly. At this time of year they also start to eat ripe fruit on trees and bushes, especially as it starts to rot. One side effect of this is that wasps can become drunk on fermenting fruit which can make them dangerous so be careful around fruit trees at this time of year. When you’re having your late summer barbecue, consider leaving a plate of jam or other sugary items somewhat away from the main party – the wasps will far prefer this to having to jostle position with your human guests and will (mostly) leave you alone.

This love for late summer sugar brings me to the next, and perhaps most fascinating, ‘point’ of wasps. Let’s talk about yeast. Yeast is a vital ingredient in bread and alcoholic drinks such as beer, cider and wine and as such has had a big effect on human culture over the centuries. Wild yeast can be found growing naturally on ripe fruit in the late summer – this is what causes it to ferment and make the wasps drunk. The puzzling thing is that the yeast is not found on unripe fruit or on the rest of the fruit tree or bush. Even more puzzling, you can’t really find wild yeast at all during the winter. So where does it go in the winter and how does it get on to all that fruit in late summer? I think you can see where this is leading. In 2012 scientists from Florence University in Italy published a study that showed, you guessed it, that the common wasp is a vital part of the wild yeast lifecycle. You can find a great, readable summary of the science in this article. Yeast survives well in the guts of common wasps when they hibernate over winter, is passed from wasp to wasp by the feeding process in spring and early summer and then transfers to the ripe fruit when the wasps go looking for their sugar fix in late summer.

So there you have it, no wasps, no bread! Who would have thought.