Teacher Wendy Gediman regularly takes Upper School students to Romania for service trips. She was recently asked to take two students who were in her fifth grade (Year 6) class last year to Romania this year. One of the girls also had her sister come along, who was in 8th grade (Year 9). The girls’ mothers came along for the trip as well. The destination was to Romanian Children’s Relief lovely playroom at the Alfred Rusescu Hospital for Children in Bucharest, Romania. The playroom is a haven for the babies who have to stay in the hospital without their parents. Most of the babies who are alone at the hospital are abandoned, although some of them have parents who are not able to care for them. It is the goal to reunite children with biological parents whenever possible. If this cannot be done, then the goal is to find the children caring homes with adoptive or foster parents as soon as possible.

While the babies are at the hospital, they are taken each day into the well-equipped playroom within the hospital. There, they receive love and attention from the social workers, psychologists, and educators that work for Romanian Children’s Relief. As well, volunteers come on a regular basis to help with the babies. The babies spend all morning in the playroom, and after lunch, they return for the afternoon. This special time gives each child the vital contact that they need with loving carers. For the children that spend up to a year in the hospital (some children have medical conditions that keep them in the hospital for treatment), the bonds that they make with the staff is strong. They receive the attention that is necessary for their development.

Kate, Anna, and Miriam are the three students who came along for four days at the end of May to volunteer their time working with the babies. It was an amazing journey for these girls. They learned how the giving of their time meant so much to the children they worked with. In fact, there was a boy with Down’s Syndrome who was three years old and had never walked before. He was a happy little boy, but he felt more comfortable scooting around the playroom on his bottom. Then, one day, Kate and one of the educators named Iuliana, decided to try something new with this young boy. At first, Iuliana and Kate sat about a foot apart. Iuliana held the little boy up on his feet. Kate held onto a biscuit. She called out to the boy to come for the biscuit. He took one supported step to grab the small biscuit. He laughed when everyone in the room clapped and said, “Bravo!” Then, Kate moved back another foot. She held up the child as Iuliana held up another biscuit. For the first time in his life, this little boy took his first steps. The game continued until they had the child walking back and forth between them, which was now several feet. Kate felt so happy to have been a part of a child learning to overcome his fear and take his first steps!

There were other amazing “little” accomplishments that all three girls witnessed over the four days in Romania. This was a wonderful experience for all of us. The girls realised that even their four days meant a lot to the children they worked with. On the way home to the UK, the girls were already planning their return trip! 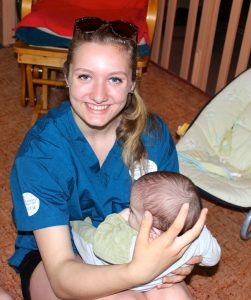 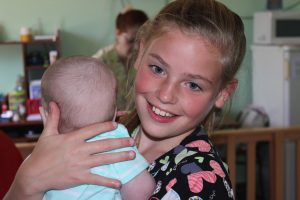 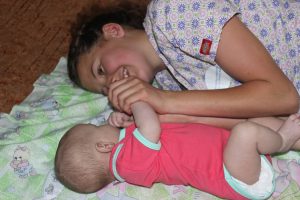 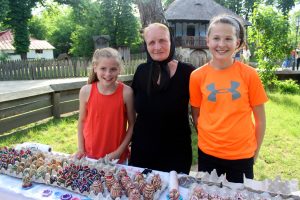