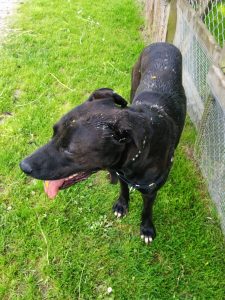 The picture at the top of this post is my dog, Negura. You many notice that he looks like an idiot. There are three reasons for this:

Not a lot can be done about the last point, but the first two are happening because he is hot. When it’s hot, humans use perspiration (also known as sweating) to cool down. This works by making our skin wet. The water in the sweat then evaporates which has a cooling effect (here’s the science). Dogs, however, have hardly any sweat glands so they cool themselves down by panting (breathing rapidly) – this uses the same evaporative cooling method as sweating, but on the wet parts of the mouth, throat and lungs rather than the skin. They also like to roll around in anything damp, so they can get that all over evaporative cooling effect we humans get from sweating. 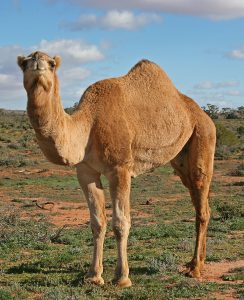 So, that’s the mystery of the dog’s appearance cleared up (though sadly not the dog himself). But what about this guy on the left? The dromedary, or Arabian camel has a hump. The hump is composed mainly of fat, which the camel’s body can break down to create water and sustenance in times of need. This explains why the camel needs a fat supply, but not why it’s stored in a hump. Fat is great at keeping you warm, which is why animals like seals and walruses have so much of it. That’s great if you live somewhere cold, but if you live in a hot desert environment then it’s not very helpful. So, the camel stores its fat in a hump so that it’s all in one place rather than spread around its body keeping it warm. 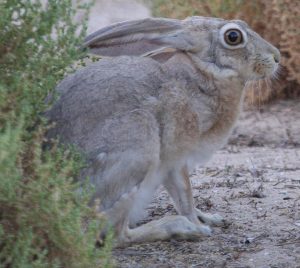 Time for one more before we go! The guy in the picture on the right is a cape hare, common across a lot of Africa and the Middle East. These hares are mostly active at night, which explains the extremely big eyes. But if you think the really big ears are all the better to hear you with then you would be wrong. Those long, thin ears are packed full of veins. By passing its blood through these veins, really close to the surface of its skin, the hare loses heat through radiation (hardcore science here).

So, sweaty humans, panting dogs, humped camels and big-eared hares, we’re all just trying to cope with the heat. Do you know of any other great animal adaptations to living in hot places? Share them in the comments below!