James Allen’s Prep School is a very young Roots & Shoots school, having joined less than 2 years ago – but the girls have really embraced the wonderful ethos of looking after people, animals and the environment.

This term, the whole school was deeply affected by the devastating Nepalese earthquake and the desolation it left behind. Having shown the girls some footage of the disaster, it was clear that they wanted to help the people whose lives had been turned upside-down by the earthquake. As Charity Co-ordinator, I had to come up with a campaign which would give the girls a target … I eventually decided that the school could challenge the girls to raise enough money to match the height of Mount Everest, which is 8848 metres. This meant we would aim to raise £8,848. A colleague came up with a slogan – ‘Move Mountains’, for which we had wristbands made in the colours of the Nepalese flag and coincidently the JAPS school colours. These were sold – and the girls were allowed to wear them in school (a great incentive as we don’t normally permit jewellery!)

We kicked off the campaign with a cake sale – cupcakes decorated with Nepalese flags, lotus flowers, stacked up as mountains, and even a ‘Temple’ constructed with marshmallow biscuits and mini-roll prayer wheels ! 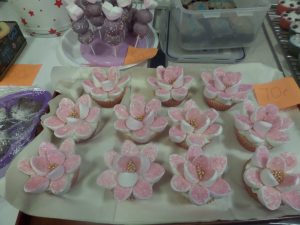 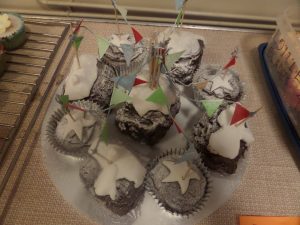 The bulk of the money for our rather mountainous target was to be achieved mainly through a school ‘lapathon’, when the girls would run a sponsored mini-marathon. There were ice-creams and a picnic at the finish lines, made out of Nepalese prayer flags! The sun shone and it was a fun day!

Where Roots & Shoots has really sown its magic is in the way it has helped to inspire the girls to make a difference on their own and in small groups. As well as our lapathon, we challenged the girls to come up with different creative ways of making money outside school which would go towards the charity. Each girl who came up with a way was presented with a special certificate, which acknowledged that they had made a difference to the world around them. The initiatives were amazing – and imaginative. There were cake sales, lemonade stands, triathlons, swimathons, cocktail shaking; we had girls busking at their local railway stations and park, organising raffles, putting on concerts , jumble sales, ……even a sponsored ‘no sugar week’! And all organised by girls aged 8-11 years. My top 2 initiatives were a Year 4 girl and her mother, who made special and individual packed lunches for her year group when they went on a residential trip. Another, was a 9 year old who organised a garden party, complete with bouncy castle, face painting and refreshments!

And so the money poured in ….literally!

At our end of term Founder’s Day, we were able to present a cheque for £18,000 to ‘Nepal’ – so not only did we reach our target of getting to the summit of Mount Everest, but we made it all the way back down again, more than doubling our target. For a school of 300 girls, that’s pretty remarkable! A large part of this money will go to rebuilding a school in Kathmandhu and we are very much hoping to forge future links with the school – so that the girls can send letters, and we as a school can send out equipment; there may even be a possibility that some of the staff have a visit to see the progress! 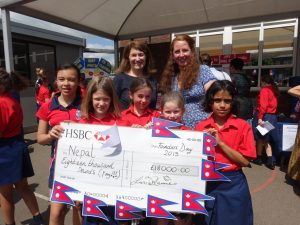