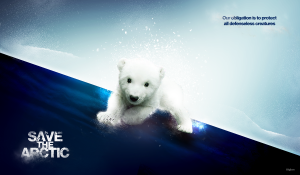 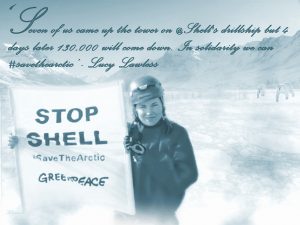 Right now, Aurora, a giant polar bear, 64 activists, and Oscar winner Emma Thompson are outside Shell’s London headquarters to tell the company to stop Arctic oil drilling. As Aurora’s defiant roar shakes Shell’s building, we need your help to make it echo throughout the world and show Shell bosses the power of the movement that they can’t ignore.

Email Shell’s CEO – tell him you won’t stand by while Shell drills in the Arctic:
https://secure.greenpeace.org.uk/ArcticRoar

Right now in the Alaskan Arctic, Shell’s drills are smashing through the seabed and risking huge oil spills. This morning Emma Thompson, First Nations activist Audrey Siegl and 64 activists called on Shell to stop this madness. They need you to add your voice to make sure the message gets through. Send an email to Shell’s boss and watch videos from the site here:
https://secure.greenpeace.org.uk/ArcticRoar

Shell’s got billions riding on Arctic drilling, but even the former boss of BP recently said that the risks involved could cost Shell its reputation[1]. And it’s our job to show Shell that the price of Arctic drilling is too high, for their reputation, and for the planet.

Send an email to Shell:
https://secure.greenpeace.org.uk/ArcticRoar

Over 7 million people are demanding Arctic protection. The movement is gathering momentum to stop Shell and to shine an international spotlight on the risky Arctic drilling they’d rather keep quiet. Activists have climbed Shell’s rig at sea, protested with kayaks in Seattle, blocked Shell’s ship in Portland by hanging from a bridge and shut down every Shell petrol station in Zurich.

It’s been spectacular and caused Shell more than a few headaches. But every moment the drilling continues, they risk devastating spills. We can’t stay quiet and let this happen.

Email Shell’s CEO – tell him you won’t stand by while Shell drills in the Arctic:
https://secure.greenpeace.org.uk/ArcticRoar

As always, thanks for being a part of the growing movement to Save the Arctic.

Claire, Akshey and the Arctic Team
Greenpeace
PS: We will be holding a live Q&A with activists at the protest at 12:30pm. You can submit your questions on Twitter using #ArcticRoar, or by replying to this email. Watch live at https://secure.greenpeace.org.uk/ArcticRoar
More info: http://www.bbc.co.uk/news/science-environment-33872486

One thought on “Save The Arctic #ArcticRoar”