Congratulations to Hannah Glover-Adams and Tommy Doe who have won the KS4 category of New Forest’s Postcard to Paris.

Fifty one Applemore College students were inspired to take action on climate change and designed and wrote postcards to World Leaders and politicians expressing their hopes for the Paris COP21 conference and about the importance of climate change.

‘Sussed in the Forest’ collected over 1000 postcards from schools all over SW Hampshire and judges chose winners from each Key Stage, each winner receiving a solar light donated by Solar Century and West Solent Solar Co-operative Limited. For each light donated as a prize, three will be placed in African communities, providing much-needed light at night and sparing families from kerosene fumes. 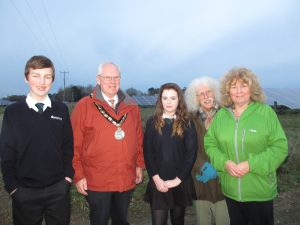 Hannah and Tommy were presented with their prizes by the Town Mayor of Lymington, Cllr Michael White at a prize giving event at West Solent Solar Farm. Surrounded by over 9000 solar panels, tucked away in a field in Lymington, Gill Hickman from Sussed in the Forest explained how difficult it had been for the judges to choose from all the high quality postcards, but the worthy winners won due to their clear messages and the impact of their postcards. 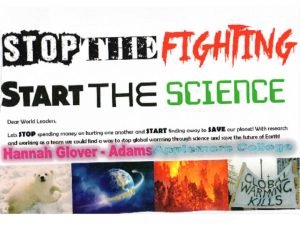 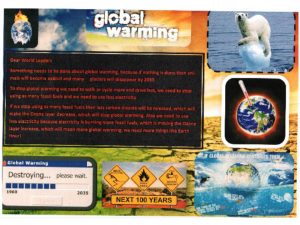 1039 postcards from New Forest children will now be carried by Mark Hancock, a wind turbine engineer from Southampton, who is cycling to Paris and meeting up with the ‘Pole to Paris’ scientists in Paris who are travelling by bicycle and by foot from the polar regions to COP21.   Mark will be blogging about his progress, on wobblingtoparis.blogspot.co.uk. He is also taking a toy owl with him, who will be blogging about his experiences too! (oswaldobikestoparis.blogspot.co.uk) 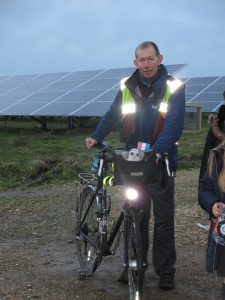 Friends of the Earth are making two large banners of the postcards, which will be carried on the London climate march on 29th November bearing the simple sentence ‘Voices of the Children of the New Forest.’ The messages from the postcards will also be used in a poem about climate change by Joan McGavin, Hampshire’s Poet Laureate.