Student volunteers were joined by Tesco Dibden Superstore staff to pick up litter on the pathways between the school and Tesco store last Friday afternoon as part of the National Clean for The Queen campaign. 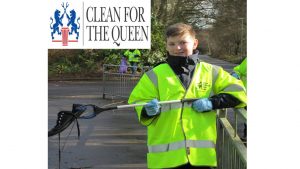 Clean for The Queen is a campaign to clear up Britain in time for Her Majesty the Queen’s 90th birthday, which will be officially celebrated in June 2016. Between 4th and 6th March litter picking events were held all over the UK and Applemore College’s Eco Committee decided they wanted to join in.

Following his visit to talk to the Eco Committee about their focus on litter and recycling, Councillor Peter Armstrong, who organised/co-ordinated the Clean For The Queen litter picking events in the Hythe and Dibden area, agreed to lead one for Applemore College student and staff volunteers during school time on Friday 4th March.

Staff from Tesco Dibden Superstore were invited to join the event, as the Eco Committee had identified that the walkways between the school and the Tesco were ‘black spots’ for litter.

Following a safety briefing about the hazards of litter picking, fifteen students and five Tesco staff spent an hour using litter pickers provided by New Forest District Council and were surprised by the amount and type of rubbish they collected. Old shoes, bottles, lots of cans and sweet wrappers were found and bagged. Shopping trollies were recovered from the bushes and were useful to bring the 24 bags of rubbish collected back to school. 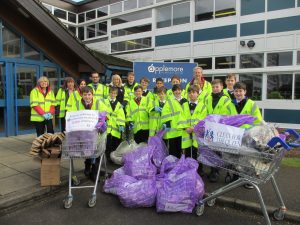 30 million tonnes of rubbish were collected from England’s streets last year which Keep Britain Tidy estimates cost £1 billion to clear up. One enthusiastic student litter collector commented “it’s such a waste of time that we should have to collect this rubbish….if people put it in a bin in the first place, there wouldn’t be any litter.”

Councillor Armstrong said ““It’s brilliant to get the next generation asking questions and interested in keeping their community free of litter. The Clean For The Queen Initiative has been and is a great way for councils, schools, churches and community groups to get out and make a difference for the local community. We hope to build on this for the future.”