5G Roots & Shoots decided to take action for a cause they admired. Over this past year, our class has watched several Hope For Paws videos. Hope For Paws is a registered charity in Los Angeles that rescues dogs. Believe it or not, even in a city like Los Angeles, there are homeless dogs that have often been hurt and abused. These dogs are scared of people and often are ill and injured. Eldad Hagar has been working for the past eight years, each day, to rescue dogs that are in a lot of danger. He has a small team of volunteers who help him in his efforts, and he has gained popularity by the fact that he films all of his rescues. He then posts the rescues online. The best thing is that he always includes the transformation of the scared dog into a happy dog, being taken care of by a vet and then put into a foster home. All of his videos end on a positive note. All of the dogs that are rescued are linked up with various foster placement programs to find a home for each one. Often, Eldad will post a video to give an update on a particular dog once adopted into a loving home. The work he does is very inspiring!

Ms. Gediman went to meet Eldad when he stopped over in London last January. He was staying at a Heathrow Hotel and invited the public to stop by and visit him during his short layover in London. Ms. Gediman was impressed by listening to Eldad explain how the organization is run. Hope For Paws must pay for all of the vet bills for the dogs.

Ms. Gediman went back to school and shared what she learned with her class. The class decided that they wanted to help, and that they could take action to raise money through a lunchtime bake sale. On Wednesday, the 16th of March, the 14 students in Ms. Gediman’s class brought in beautifully baked and wrapped cakes and cookies. The students were excited, and could not wait to take turns selling the food!

The students in grades 5-8 (Year 6-9) all came to buy what was on sale during recess. Some students even decided to give extra money as a donation!! All of Ms. Gediman’s class took part in selling and collecting the money. Once the sale was over, there was very little food left!

5G went back to class and counted the money that had been collected from the sale. The grand total was £255! This was an amazing effort on everyone’s part. The students in 5G felt so proud and so happy when they realized that they had raised a nice amount of money. In class, the students discussed how important it is to take action when one knows help is needed. While, we cannot help everyone in need, we knew that we could help this charity we had come to know through following their work online. We were all excited to think that our sale of cookies and cupcakes at recess will now go to help dogs in need. We all agreed that it feels so good to know that you can make a difference in a positive way. 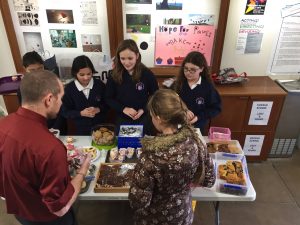 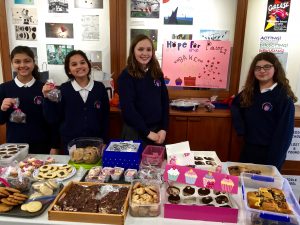 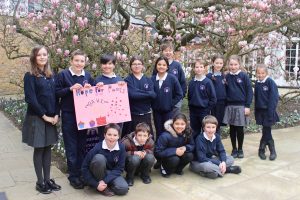