‘There’s a worm at the bottom of your garden, and his name is Wiggly-Woo.’

It’s a song that’s popular with kids all across the UK, and it shows just how much we are fascinated by earthworms. When we’re little, we’re fascinated by these strange looking writhing and wriggling stringy animals, picking them up out of the soil when we dig the garden or when they come to the surface when it rains.

They aren’t just fascinating to look at; they are also very important for keeping our soil healthy, which in turn is crucial for plants and animals to grow.

Observing and recording the types of worm are in the ground is a good way of working out the health of the soil, and you can submit the number and types of earthworm you find to the Earthworm Watch project.

Although it might not look like it, Earthworms do have a front end and a back end. It can be hard to spot (they do have tiny little mouths!) but one way to tell is to look for the clitellum, also called the saddle – the thicker band on the worm – which is closer to the head end than the tail end. 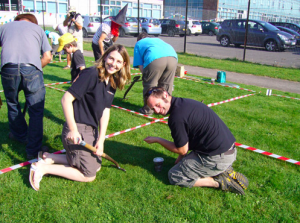 Emma Sherlock is the earthworm curator at the Natural History Museum in London, and she’s also Chairman of the Earthworm Society of Great Britain and Ireland. What a job! She’s passionate about worms, as you can see from this brilliant video where she describes them as humble heroes.

Emma also featured on this brilliant BBC4 radio program where she talks about the importance of worms, and also about the biggest earthworm in the world. 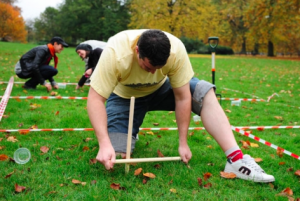 This is a great activity to do with a class outside – competitive worm charming! Worm charming is where you try to coax worms out of the ground by producing vibrations in a number of different ways. The vibrations mimic those produced by raindrops hitting the ground, which lures worms to the surface as they think it’s raining.

Equipment: White tape for taping out a grid of 2m2 squares, a few gardening forks, some musical instruments (e.g. small glockenspiel, little drums, etc), a pair of stakes (like cricket wickets) with one with notches cut in the side

Method: Each square should try a different method of worm charming, and you’ll need two people per square – one to do the charming, and a second person, called the ‘gillie’ to collect the worms.

Get everyone set up in the squares, give them a 10 second countdown, then it’s time to get charming! 5 to 10 minutes is a good amount of time. Once the time is up, everyone counts up their worms and the one with the most worms wins!

As well as identifying the types of worm you’ve found, you can also compare how effective the different techniques were, and if you got more worms from certain squares over others.

If you get really good at it, you could join the World Worm Charming Championships, which takes place in Willaston in Cheshire every year. They’ve also got a list of worm charming rules!

No time to charm worms? If you want to encourage lots of worms to the surface quickly, there’s an alternative method. You need to mix 20 grammes of mustard powder with 2 litres of water, then sprinkle over the area you want to charm the worms from – about 2 metre-square area should do it.

The water seeps through the soil to where the worms are lying, and the mustard irritates their skin a little (but doesn’t injure them) so they wiggle to the surface, then all you need to do is pick them up.

Don’t forget to return the worms to the soil once you’ve counted and identified them! Give them a rinse in fresh water first if you’ve used the mustard method.

The Earthworm Society of Great Britain