Spring, summer, autumn, winter – the year is split up into 4 very distinct seasons in the UK, and each has it’s own weather and signs you can spot. Spring means lots of rain, trees coming into leaf, flowers starting to bloom and animals waking up. Summer means warmer weather (mostly!), a green countryside, and long, lovely days.

But why do we have seasons at all? What causes them? And are the same everything in the world?

What causes the seasons?

The seasons are caused because the the axis the Earth spins on (an imaginary pole going through the planet from the North to South Pole) isn’t straight. It’s slightly tilted. This means that for each rotation of the Earth around the Sun (which takes one year) for part of the year the Northern hemisphere of the Earth is angled to receive more of the direct rays from the Sun, and gets longer days, and for another part of the year the Southern hemisphere gets the direct rays.

When the Northern hemisphere, where the UK is based, is angled towards the Sun, we get summer. When it’s at it’s farthest point, it’s winter, and spring and summer are where we are moving between the two places.

This tilt also causes the length of the days to vary closer to the poles, so the UK experiences longer days in the summer, and shorter days in the winter

Does that mean the Earth is closer to the Sun?

No, the Earth as a whole planet stays the same distance from the Sun. It’s simply the tilt of the Earth that means parts of the Earth are exposed to more or fewer of the Sun’s rays. 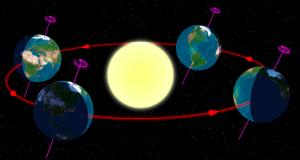 Are the seasons the same everywhere in the world?

Because of the tilt, the Northern and Southern hemisphere have opposite seasons, so when it’s Summer in the UK, it’s Winter in Australia.

But there’s more. The tilt is most obvious at the poles, and less obvious at the equator. So at the Equator temperatures are fairly stable and the seasons aren’t that pronounced. That’s one of the reasons that people in the UK like to go South – closer to the equator – for sunshiny holidays, particularly in the Winter. The day length also doesn’t vary much at the equator, so both Winter and Summer days are about the same length.

However, at the poles, the differences is much greater. So in Winter at the North Pole and in countries near there, it can be dark nearly all day and night, and around mid-Summer, the Sun never sets.

Why is the Earth tilted?

There’s a rather incredible reason for why the Earth’s axis isn’t upright. Billions of years ago, when the Earth was a young planet, something huge hit it and knocked it off kilter. This large something also knocked a lump of Earth off, which became the Moon! How amazing is that.