What does ‘critically endangered’ mean?

You’ve probably heard about wild species being endangered, critically endangered and extinct. The status of a plant or animal is determined by the the IUCN’s Red List. IUCN stands for the International Union for the Conservation of Nature.

An animal or plant that is determined to be critically endangered has a 50% chance of going extinct in the wild over 3 generations or 10 years, or if there are less than 50 mature individuals, or if there is a severe and rapid decline in population numbers, or if there is severe habitat fragmentation. The exact terms are technical and you can read them online at the IUCN Red List categories and criteria.

Because the Angel Shark has a flat body, it looks a little bit more like a ray than a shark. It’s nocturnal, and spends its time buried in the sand at the sea bottom with just its eyes peeking out, ready to pounce upon its prey – flatfish, molluscs and crustacea. It used to live in the Atlantic as far North as Norway and as far South as the Canary Islands, as well as the Mediterranean sea, but now is extremely rare.

The second fish on our list. The Atlantic Sturgeon can grow up to 3.5m long, and is unusual in that it breeds in rivers, though it

lives in the sea – one of the largest fish in the UK to do this. It’s been fished to the point of extinction by people who want it for it’s caviar – fish eggs – which are regarded as a delicacy. Is any delicacy worth causing the extinction of an animal for? We think not.

This majestic animal is one of the rarest birds in the world. It lives most of its life out at sea, hunting herring and squid which it catches by diving from a great height, plunging deep into the water. The Shearwater nests between February and June, with breeding pairs laying a single egg.

It’s not just animals that can be endangered; plants often are too, though they can be overlooked. This special and extremely rare species of moss is endemic to the British Isles, and only grows on vertical limestone rock faces, or under water. It’s so rare that the exact location it grows in the UK is a closely-guarded secret.

Eels were once common and abundant in the UK, but are now sadly critically endangered. They have an incredible life cycle that’s worth reading into more, but essentially they are spawned in the sea before moving to fresh water like rivers and lakes to grow, then returning back to the sea to breed and spawn themselves. All European Eels are thought to spawn in the Sargasso Sea.

This beautiful ray is the largest European ray, and although it can be found in waters all through the North Atlantic from Iceland to Morocco, it’s thought to have already gone completely from the Irish Sea. Individuals live for around 50 years, and it takes 14 years for the population to double in size – this slow growth and reproductive rate make it particularly susceptible to population decline.

What an amazing name! In the UK, this tufty little moss is only found in Cornwall, where it likes to grow on hedge banks. The main threats facing it are the use of chemicals and fertilisers on farmland, and lack of suitable patches of earth to grow on. 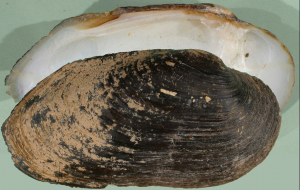 Marine mussels are a popular source of food, but they have freshwater relatives, and the Spengler’s freshwater mussel isn’t just endangered; it’s one of the most threatened invertebrates in the world. Its thick shell, which can grow up to 20cm in length, has a beautiful pearlescent nacre on the inside which was popular for producing buttons and as an inlay on decorative objects. It’s also affected by chemicals that leach into the rivers they live in. These mussels also have a fascinating lifecycle, with a parasitic larvae stage that must find a specific species of fish to grow in before leaving the host and completing its lifecycle. If the fish population is affected by pollution or fishing, etc, then that will also affect the mussel population.

Another plant to finish off our list, this woody shrub is endemic to England, but is now only found in the Avon Gorge near Bristol in the South West of England, and in parts of Somerset and Gloucester.

Find out more about these critically endangered animals on the ARKive website.