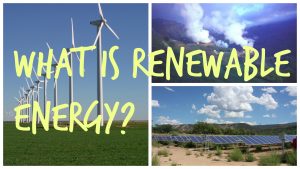 We need energy to power our lives; everything from our mobile phones to our fridges to our schools and hospitals rely on energy to power them. It gets our food moved from farm to plate, and helps us get to work and on holiday.

But energy from non-renewable sources such as fossil fuels are not only finite – which means they will eventually run out – but also cause lots of pollution.

So switching to renewable energy sources, which are also generally cleaner and better for the environment, is good news for everyone. Renewable energy comes from sources that won’t run out, and can be used over and over again.

Renewable energy is defined as ‘energy that is collected from resources which are naturally replenished on a human timescale, such as sunlight, wind, rain, tides, waves, and geothermal heat.’

Solar energy comes from the sun, and is all about trapping the energy from sunlight and heat and using that to power things here on earth. This can be done in a number of ways, and the two main ways are photovoltaic cells and solar thermal energy.

Photovoltaic cells, which are also often known as solar panels, use the energy from the sun to power a chemical reaction in the cells to generate electricity. This electricity can be stored in batteries or used immediately.

Solar thermal energy uses mirrors and lenses to concentrate heat from the sun to heat up water. The steam from the water is then used to turn turbines which in turn generates electricity.

You’ve probably seen huge white windmills lining hills across the country, and there are also lots of windmills in huge off-shore wind farms along the coastline.

These windmills use the power of wind to turn the arms, which in turn generates electricity. So long as the wind is blowing, they can generate electricity.

Video explaining how geothermal energy works by the US Geological Survey

The deeper you go into the Earth, the hotter it gets. Geothermal power harnesses this heat to generate energy by piping water deep underground until it gets hot, then using the steam that this generates to turn turbines which in turn generates electricity.

If you’ve been to the seaside you’ll know that every day, twice a day, the tide goes in and out. Tidal barrages are huge underwater devices that turn as the water flows through them, first one way as the tide goes out, then the other way when it comes back in. They capture some of the huge amount of energy that is being generated by all that volume of water moving to generate electricity.

Hydro means water, and hydroelectric power generation works in a similar way to tidal power, except rather than using tidal energy, it uses energy from flowing water in streams and rivers. A common example are reservoirs. As well as being useful for storing water, releasing water gradually under pressure can be used to drive turbines which in turn generate electricity.