It seems like another lifetime since I read ‘In the Shadow of Man’ at the age of 9, and various later stages since. I’ll always remember how enthralled I was by Dr Goodall’s story. How she had somehow managed to transcend the species boundary (and become integrated as part of a wild chimpanzee troop). I was insanely envious, and only wished she would one day ask me to join her in Africa. As I grew older, I became more and more aware of the plight of the natural world thanks to the likes of Jane and David Attenborough. As a result, I decided very early on that protecting nature was the cause I had to dedicate my life to.

I have always idolised Jane, often referring to her as ‘scientific royalty’. I had always wanted to meet her, but never thought I would, let alone have the honour of her company at Windsor Castle for an entire week.

The Jane Goodall Institute has always been ahead of times with their approach to conservation. Long before many of the bigger NGO’s, Jane realised three integral pillars in conservation: humans, animals and the environment. These three variables are still today seen as incompatible or unimportant, often sacrificing one in favour of the other, despite the prosperity of each being integrally important to the other two. It was this philosophy, and the vision of an empowered youth, that inspired Jane to create her Roots & Shoots program in 1991. Since then, R&S has gained a life of its own, and its global reach far extends that of even the Jane Goodall Institute. So needless to say, this is why it is imperative that this global network collects ideas and builds a vision of how to move forward together, as a global family. We are lucky enough to have an annual invitation to St Georges House, within the grounds of Windsor Castle, for just this purpose.

The grounds of Windsor Castle are quite overwhelming- history seeps from every brick. It is the oldest occupied castle fortress in the world, and by far one of the most awe inspiring. As you walk late at night around the grounds of this castle, you can imagine a world far from the one we know, where the monarchs of old walked. Their troubles a thousand times removed from the likes of deforestation and global climate change which so burdens our thoughts today.

It really only became apparent how diverse and wide reaching R&S is once we all got to know one another under the aged wooden beams of Vicars Hall. Over 30 countries represented, this in itself is only 1/4 of our global family! I feel this is a testament to how the basic principles of compassion towards humans, animals and the environment can be universally applied, understood and practiced regardless of cultural or economic background. It is this that has allowed our global network of grassroots environmentalism to grow into what is now a fierce fighting force for change across the globe.

Our common determination we all shared through R&S, was a catalyst not only for a productive working week, but also in the formation of close friendships and cooperation. I’m sure I speak for us all when I say we left having gained 30+ friends, and feeling like we had known one another much longer than just a week. I hope they are friendships that will endure our lifetimes.

The topics discussed were diverse from the ranging of the refugee crisis, to the decimation of oceans and forests. We also had the pleasure of listening to the progress and issues faced in each country. All these discussions aimed to pool our knowledge, create exciting new campaigns and use our expertise to ameliorate our organisation and enable all our members to make meaningful positive change in the world.

Spending time with Dr Jane never fails to bolster people’s passion- our excitement, love and appreciation for her was evident the entire week. Every time Dr Jane and I spoke, I found myself transformed back into my 9-year-old self. The overawed feeling seemed to permeate my mind in her presence, as did the incorrigible urge to smile. Every question I have ever wanted to ask her ran through my mind ‘What is this person like? How long did it take to write this? Will you be my wife?…’. She didn’t seem to mind and I only hope she didn’t think me too much a fool!

Being around such passionate, intelligent and welcoming people made me leave with a heavy heart as a result of being without the company of my R&S family, although, WhatsApp is never very silent! They all enabled it to be one of the best weeks of my life, the only down side being that I miss them dearly every day.

None the less, the vision we have created will help us all use our lives to make a difference. We will take all we have learned back to our respective countries, which will afford for a cascade of positive change and collaboration around the world. I hope that over the coming years, many of our plans will come into force and have a truly global impact for all those who participate.

The issues our world faces are only going to intensify, and I have no doubt that R&S will intensify their efforts equally. It will always be a true source of happiness for its participants and a driving force for peace and harmony in all aspects of life. The hope we give will be the death of apathy, and I have no doubt each person I have met is an immeasurable source of hope. Until the next time, my friends! 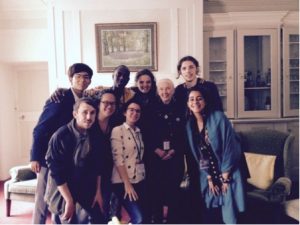 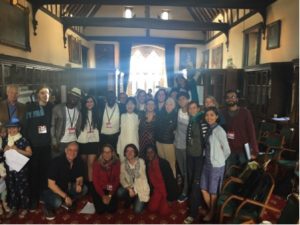