On Thursday 4th August, Miss Stack and I met 8 very excited girls and their parents, bright and early outside Windsor Castle!  Earlier this year, Dr Jane Goodall had asked if some of the girls from JAPS would join her at her conference to present their Roots & Shoots work in the form of a presentation.

For the last three years, Dr Jane has been invited to Windsor Castle by the Queen (while the Royal family are in Balmoral) for her international Jane Goodall’s Roots & Shoots conference.  35 youth leaders from around the world meet together to discuss conservation projects. It was the end of the week for them and after lots of planning and thinking, the girls from JAPS were going to give them a break, and show them what a school can do to make the world a happier place. Outside the gates of the castle, we were given security passes and clutching our scripts and adopted animals (2 chimps, a tiger and 2 snow leopards!) we were ushered in, past the queuing tourists.

After watching the changing of the guards, the girls assembled in the oldest hall in the castle, St George’s, which is where William Shakespeare’s The Merry Wives of Windsor was first performed. The girls gave their presentation brilliantly; they had practiced their lines at home and aided by lots of photos on a PowerPoint, the audience was spellbound! They talked about the charities that they had supported at JAPS, including the Nepal ‘Move Mountains’ campaign, and all their Eco work. At the end, the girls were given a standing ovation and it was noticeable that there were quite a few damp eyes in the audience. Ms Stack was told by several of the delegates that it was the highlight of the conference!

Afterwards, the girls were given a bracelet by the Roots & Shoots’ Uganda representative and enjoyed having their photos taken with Dr Jane and all the members of the Roots & Shoots Global family. We all enjoyed talking to Manoj, the leader in Nepal, and seeing his photos of the animals that he rescues!

Gabriella: “We had a wonderful time and it was great to meet Dr Jane Goodall again …..We loved meeting the man from Nepal (Manoj) who showed us his photos of all the animals he rescued ! WE enjoyed having photos taken with everyone on the steps of the castle….. Then the  R & S Tanzania people gave us each a handmade bracelet made from wire and beads  – and Miss Raimes was given a handwoven rug! It was fun to be at Windsor castle for the day!”

Ella: “I was excited when some of the Roots & Shoots representatives from around the world said that they would turn vegetarian after hearing what I had done!”

Eden and Ella: “We were really, really nervous about doing the presentation – but excited at the same time. We had practiced the speech non stop on the way there on the train ….everyone in the carriage was staring at us!”

Eden: “We brought all of our adopted animals with us to meet Dr Jane’s MR H and Miss Cow!  We had; 2 snow leopards, the WWF tiger, the Panda, and Roots & Shoots – our two chimps! Whilst we spoke, the animals sat by our feet and listened without making a sound….no roars or growls!”

All: “We were really proud of how our speech went  -and we were thrilled when everyone stood up at the end to give us a clap!

Next year we are going try even harder to look after our world and all the animals and people in it!!”

It was a wonderful day and very inspiring for all of us who went. Thank you girls for performing so well, and thank you to the parents for bringing them along. 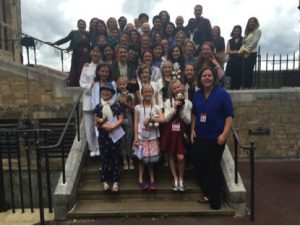 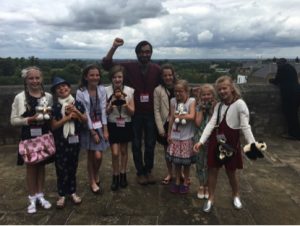 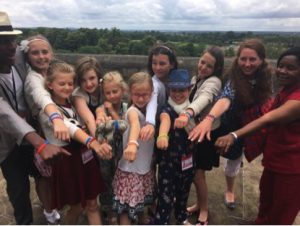