Children at Mayflower Primary decided to raise some money for a charity call Thirst Relief which provides clean water by building wells in communities in countries such as Bangladesh, India and Pakistan.

They wanted to put some FUN into the FUNdraising, so planned a very creative competition.  Every child in the school was given a plastic milk bottle and they had to fill it with coins from friends and family at home and decorate it!  There were prizes for the best bottle in each age group.

They were hoping to raise enough money for one well to be dug in the school’s name.

The entries to the competition were amazing – have a look at the powerpoint with pictures of the winning bottles:

The Winners of the Bottle Decorating Competition

The good folk from Thirst Relief were so impressed, they made a special visit to the school to collect the money! 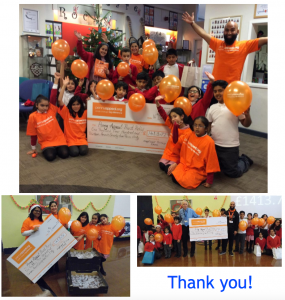 We are so proud of the children and of what they have achieved – both in terms of their generosity AND their wonderful creative skills.  They have learned that, working together, they can make very real changes happen in the world around them.