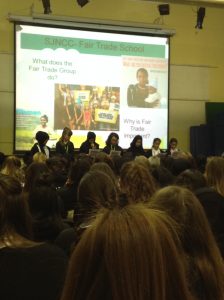 The Fair Trade Group presented a powerful speech this week during assembly as part of Fairtrade Fortnight. The students passionately argued the value of Fairtrade products by showing how the Fairtrade Foundation helps support workers’ rights in developing countries and supports justice, children’s rights and women’s rights. They concluded their speech with the following statement; “we as the human race have responsibilities for the world we live in and the people we share it with. We are all responsible for making the world go around.”

The students were supported in assembly by a Fairtrade Speaker Sue Wilson who outlined how Fairtrade companies support communities by providing community payments for local needs. Sue showed the students the process of how cashew nuts are grown, roasted and produced and the difficulties for people that farm them.

Sue also told students about Hanumanthamma, a single mother of five children who also looks after her elderly mother. Hanumanthamma was the sole breadwinner, working seven days a week as agricultural labourer when work was available and earning only 20p a day. Hanumanthamma became involved in Fairtrade projects to improve the livelihoods of cotton farmers and labourers. She initially began her journey by making compost for local farmers and earnt £40 in the first year and in doing so she was able to pay for her children’s education. She gained support from a self-help group and was given the opportunity to develop her leadership skills. She is now involved in local advocacy, ensuring people in the village get the 100 days of guaranteed employment that they are entitled to under Indian law. She also works to ensure government systems that distribute essential food operates properly in the area. 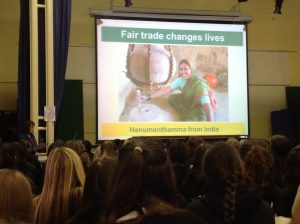 Sue finished her presentation by reading the following quote Hanumanthamma; “The cotton project gave us hope, confidence, courage and security.  I see better days not only for myself, but for all my children.” 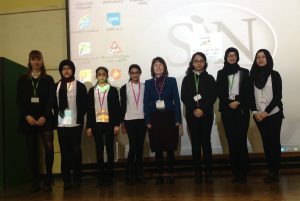